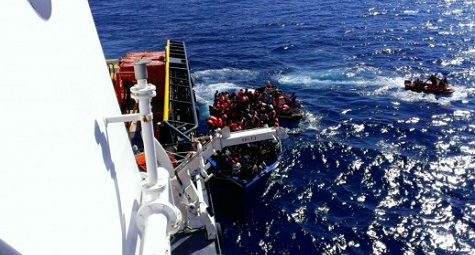 You might wonder why I decided to post the story about the Blue Ribbon at the beginning of the year. OK, I can understand your doubt because most people consider the Blue Ribbon the symbol of high quality regardless of the period of year and other specific category. Others may associate the Blue Ribbon to the French cuisine school also known as the Cordon bleu. That sounds interesting but is still not what I wanted to share with you although one of my favorite dishes bears the same name. People more oriented to the sea would associate the Blue Ribbon to the prize awarded for the fastest crossing of the Atlantic Ocean by passenger liners, also known as the Blue Riband. Now we are much closer to my subject. Seafarers' Union of Croatia rewards the individual or the crew with the prize called the Blue Ribbon (Croatian: Plava vrpca) for their exceptional bravery and/or good seamanship achieved within the past year during their service. I would like to emphasize here that I strongly believe all nominees without exception deserve the highest honors. The individual winner of this prize is Croatian Bojan Tasić, the second mate aboard American ship Kehoe Tide, while the Blue Ribbon for crew belongs to the crew of the same ship under command of capt. Željko Vuković. The crucial event for winning this prize took place on June 12th 2014 some 60 NM off Libyan shores in the Mediterranean Sea. The commander of Kehoe Tide spotted capsizing of 20 m long boat overcrowded with people. He immediately stopped the engines and engaged his crew in the SAR action. The Second mate Bojan Tasić managed to save 70 people from the sea. Among them almost all were non-swimmers, mostly women and small children. Second mate managed to maneuver 10 m jet-powered rescue vessel between the wrack, panicking people and corpses. He was chasing time struggling to lift the non-swimmers from the sea and managing the boat not to be capsized by panicking survivors. At the end of the day it turned out that it was about some 250 Syrian refugees aboard 20 m long boat which was deliberately capsized by illegal smugglers who charged their ‘service’ by 700 – 1000 $ per capita. Bojan showed exceptional soberness, courage, skills and above all, humanity by rescuing 70 people himself and contributing to rescue total of 142 refugees. French ship Arcadie which was passing by and engaged in the rescue action saved 60 people while 48 unfortunates could not be saved. The crew of Kehoe Tide found itself in the similar situation on June 30th 2014 when another 214 Asian and African immigrants were saved. That was more than enough for the Blue Ribbon prize by the Seafarer’s Union of Croatia. It is interesting that five out of seven crews were nominated for SAR actions with illegal immigrants or refugees involved. One life was saved by a professional and quick response by SeaHelp service vessel in Croatian Adriatic. The crew managed to reanimate Slovenian tourist saving him from drowning. The nominee crew of MS Lady Račišće saved one Kiwi single handed sailor aboard a 8,8 m sailing yacht in the middle of the Atlantic, under conditions of 35 knots of wind and some 5 m high waves. As I mentioned above, all of them deserve the highest honors because it is our duty to provide help at sea to anyone, regardless of the circumstances. I wish you a calm sea, a fine wind and a strong mast!
safety sailing traditions