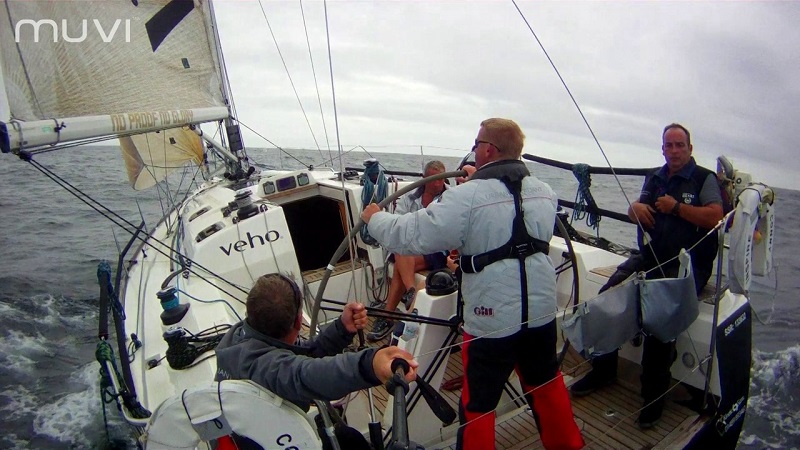 I still remember times when I got home from a sailing trip or a regatta only with memories in my head. I could not take more because I always had too much to do on the deck while those who were not working that much did not have waterproof cameras. I could only rely on memories or just a few photos by those who were willing to risk their cameras getting wet. As time went on and the technology advanced and the number of my sailing photos increased. At first they were taken with waterproof cameras and later by mobile devices’ cameras. Still that doesn’t seem to be enough for modern kids and gadget fans. The action has to be filmed and published online via social media. At first I was skeptical about such exposure but I found filming the action useful sometimes.

At this point I mean the recapitulation of the race where all mistakes could be seen after the race and discussed among the crew members. Muvi HD action camera by Veho seems to be perfect for such tasks. It is equipped with waterproof and shockproof case and is easy to be mounted on almost every surface or object. Furthermore, there is off/on and start/stop remote control as well as mounting devices. Its dimension of 80 x 47 x 19 mm makes it easy to carry in any pocket or sport purse while its weight amounts to not more than 81 g. It is equipped with 1.5 inch playback LCD screen and a 1400 MAh battery enabling recording period of three hours. Muvi HD action camera records 16 mbit/s picture quality with 1080 p resolution, 30 mbit/s with 960 p resolution and 30 or 50 mbit/s with 720 p resolution. Its standard equipment includes 5 megapixel lenses with 170° recording angle. Muvi HD action cameras are globally recognized as afordable, modern and user friendly gadgets. The quality of pictures and films taken with them is enough to keep up with the competiton. Catch the sailing action and get back to me with feedback. I wish you a calm sea, a fine wind and a strong mast!
camera gear review