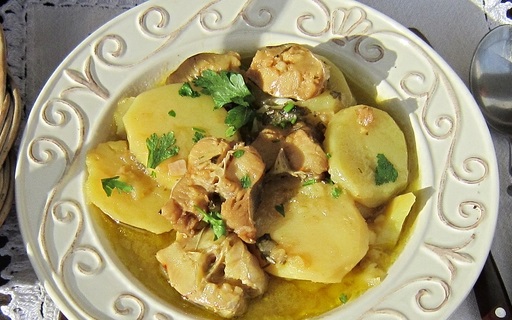 In terms of cooking aboard, especially cooking local Mediterranean recipes aboard; there could be many types of holy trinities. The overall and principal trinity would be about the fish that swims three times in its lifetime – in the sea, in olive oil and in wine. That rule says that fresh fish needs nothing but to be caught, prepared using genuine olive oil and served with a drop of fine wine. Simplicity at its best… The trinity I want to say something about this time is fish, onions and potatoes. Such combination leads us directly to the dish that is called gregada in Croatian Adriatic. There are several variations of fish prepared with potatoes but gregada takes a special place. The most famous one would be hvarska gregada, or the gregada from island Hvar. At first glance this dish looks very difficult to prepare but I am sure you will change your mind once you read the post. General recipe considers slowly cooking quality fish along with potatoes in onions and olive oil. First of all you will need pieces of quality fish such as scorpion fish or grouper, conger, bream, red fish, etc. Clean the fish and cut it into larger pieces. Meanwhile warm some olive oil in a larger pot and simmer finely chopped onions until they get glassy and gold. Make sure you do it on a relatively low heat. Cut potatoes into slices and put them along with the fish in the pot. Add one spoon of vinegar which will help the fish meat keep together. It is allowed to add some water as well, if your gregada seems too dry. Do not forget to add finely chopped fresh parsley when the gregada starts getting a stew-like consistency. While the mixture is slowly cooking it is time to add other ingredients. Their choice usually depends on the chef’s imagination and mood, availability of local herbs and chef’s taste. However, some ingredients are inevitable such as salt, pepper and bay leaf. Traditional chefs would use ground salt and whole black pepper seeds. The latest fashion considers the use of the flower of salt (fleur de sel), but that type of genuine salt comes at the end of cooking, just before serving. Let’s quit debating on the ingredients while our food is getting overcooked… Keep in mind that the whole procedure of cooking gregada considers very low heat and slow cooking. Do not stir the mixture; just shake the pot from time to time. Time of cooking depends only on potatoes – gregada is ready to be served as soon as potatoes are cooked. Some ten minutes before you decide to remove the pot from the heat add some more olive oil and few drops of dry white wine. This is how a classic or basic gregada is made. Variations consider capers and dried thyme as ingredients, shrimps or pieces of lobster as support to the fish and different combinations of basic fish... Since gregada originates from the old fishermen tradition it is not meant to be neither difficult to prepare nor sophisticated. Nowadays, it is considered a specialty because modern generations forget their roots and anything old and traditional seems to be exotic and special. Believe me, our old folks did not complicate their lives – they always tried to do it the easy way so do not hesitate to prepare gregada in your own style, even aboard a sailing yacht. Since the old fishermen did not have sommeliers at their disposal, I suggest not to make a great fuss about which wine will be served with gregada. I wish you a calm sea, a fine wind and a strong mast!
Croatia fish recipe sailing recipe