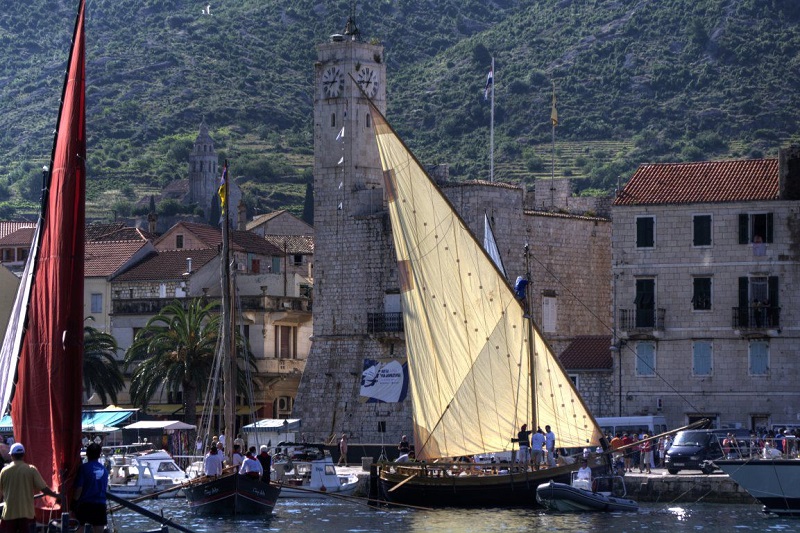 Different sources give us different data on this subject so it is pretty difficult to tell where and when the first sailing competition took place. Since it is essentially a sporting event there has to be an organizer of the race, prescribed rules and competitors. The history of sailing mentions the Water Club of Cork, founded in 1720 in Cork town in the southeast of Ireland; as the oldest known sailing club. The oldest data on sailing race dates form 1749 when the regatta took place between Greenwich and Noren on the banks of river Thames in England… At first, sailing meant essential virtue for survival (fishery), transport, trading and war craft in the early days. Sporting elements were introduced in sailing after the appearance of steam machine and motor engine. However, I am proud of being given a chance to share with you some interesting facts about sailing history of my country, Croatia. The regatta called Rota Palagruzona or the Route of Palagruža took place on June 12th 1593. Yes, that’s right. The first regatta in Croatia took place at the end of 16th century. Although there were no sporting clubs at that time in Croatia, this event had all other sporting elements. The terms of Rota Palagruzona were set few weeks earlier when crews of 74 fishermen boats from Komiža (island Vis) have gathered in Hvar town hall. Hvar town on the island Hvar used to be administrative center for islands Hvar, Brač and Vis, under the Venetian rule, with Venetian Governor as the representative of the state. The cause of the meeting was not sporting event for fun but something more serious and essential for survival on Adriatic islands. Fisheremen from Komiža could not agree about fishing rights in waters around billow island Palagruža, some 42 NM to the W off Komiža. Fishermen community along with the governor has reached the agreement on terms of fishing rights for Komiža’s fishermen which remained in power until 1936 when the first engine powered boat appeared in Komiža. The rules allow choosing a fishing area at sea around Palagruža along with operating area ashore Palagruža island to the fastest fishermen boat to reach it during the race from Komiža, known as Rota Palagruzona. Fisherman Bogdan from Komiža was elected the commander of Palagruža while none crew leader was allowed to embark men under 18 years of age. Furthermore, every crew had to be armed with sabers and harquebus as a defense from the pirates, while one galley from Hvar had to escort the fleet. As mentioned above, the first such event took place on June 12th 1593 and kept going on every year until 1936. Typical fishing boat at that time was gajeta falkuša, traditional Adriatic wooden boat powered both by sails and pedals. This vessel could reach the speed of 8 knots and take load as heavy as 5.5 t while her length amounted up to 10 m. Her beam deferred depending on additional side parts called falka (where the name falkuša comes from) which exceeded the height of the sides as well as the beam. This type of the boat was forgotten and abandoned after the appearance of the onboard engine while traditional building was nearly forgotten. Thanks to a group of enthusiasts and tradition lovers along with academic community the boat and the custom of sailing from Komiža to Palagruža have been revitalized through the work of Ars Halieutica, the maritime heritage association dedicated to research, teaching and presentation of the experience of living with the sea. Read more about what they have achieved so far in one of my future posts. I wish you a calm sea, a fine wind and a strong mast!
Adriatic Sea Croatia Dalmatia Komiža Palagruža race regatta