By announcing the C series, Bavaria actually announced the revolution in their business orientation, as well as the appearance of the brand-new concept. Bavaria C57, their flagship at a time, proves that Bavaria’s management really meant it seriously.

This gorgeous yacht is the result of a cooperation between Germany’s most famous sailing yachts manufacturer and Maurizio Cossutti, a renowned Italian naval architect. Two synonyms of Germany and Italy, engineering and design, have met together in order to provide a brand-new masterpiece. As Maurizio Cossutti is well known for his projects within ORC format of racing yachts, one can flair that the new Bavaria could be anything but slow and lazy. However, the intention was not to build a race monster, but a large, comfortable, stylish and luxurious vessel. Employing the cutting-edge technology such as VacuTec, the efforts of the expert team resulted in C57’s light and ultra-stable hull with long waterline for high basic speeds. 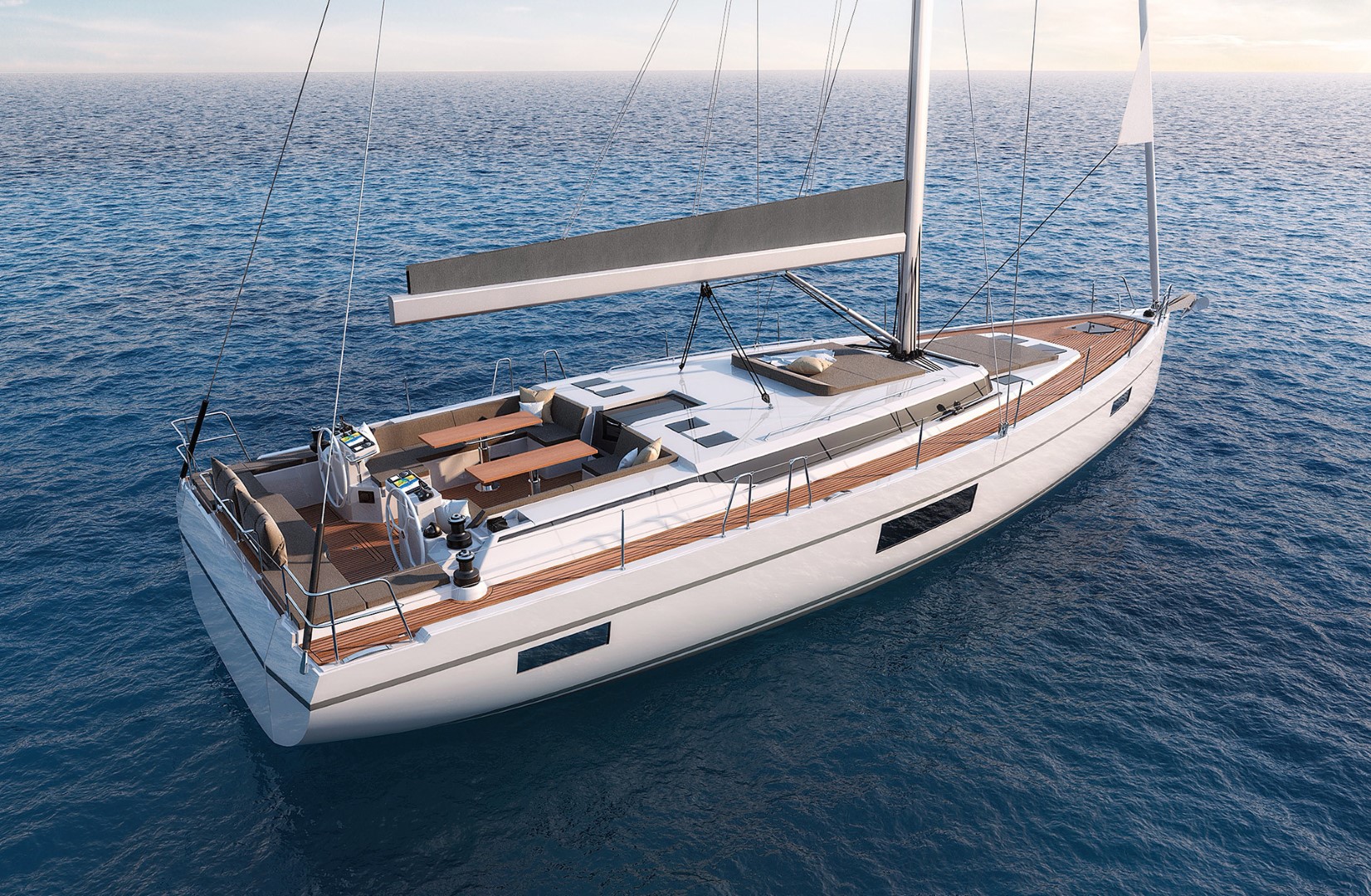 Excellent sailing performances are gained by generous sailplan surfacing 153 m2 in total. The full battened mainsail is as large as 80 m2, while the headsail alters between the self-tacking jib and the overlapping genoa. Downwind sailing is done with a 232 m2 gennaker. This is all supported by a mast that is approximately 24.26 m above the waterline, along with the iron keel drafting as much as 2.52 m. Length overall amounts to 16.73 m which makes quite a volume when calculated with the overall beam of 5.28 m. Quite impressive digits, don’t you agree?

Twin rudder system operated from double helmstands provides course-keeping with ease, while mighty winches are positioned on skipper’s hand on both pedestals, making sailing easy short-handed or even single-handed. For easier and more comfortable docking there are both bow- and stern-thrusters. Once anchored, the stern of the Bavaria C57 easily turns into the open-air party place thanks to barbecue, sink and the fridge, all positioned at the stern. 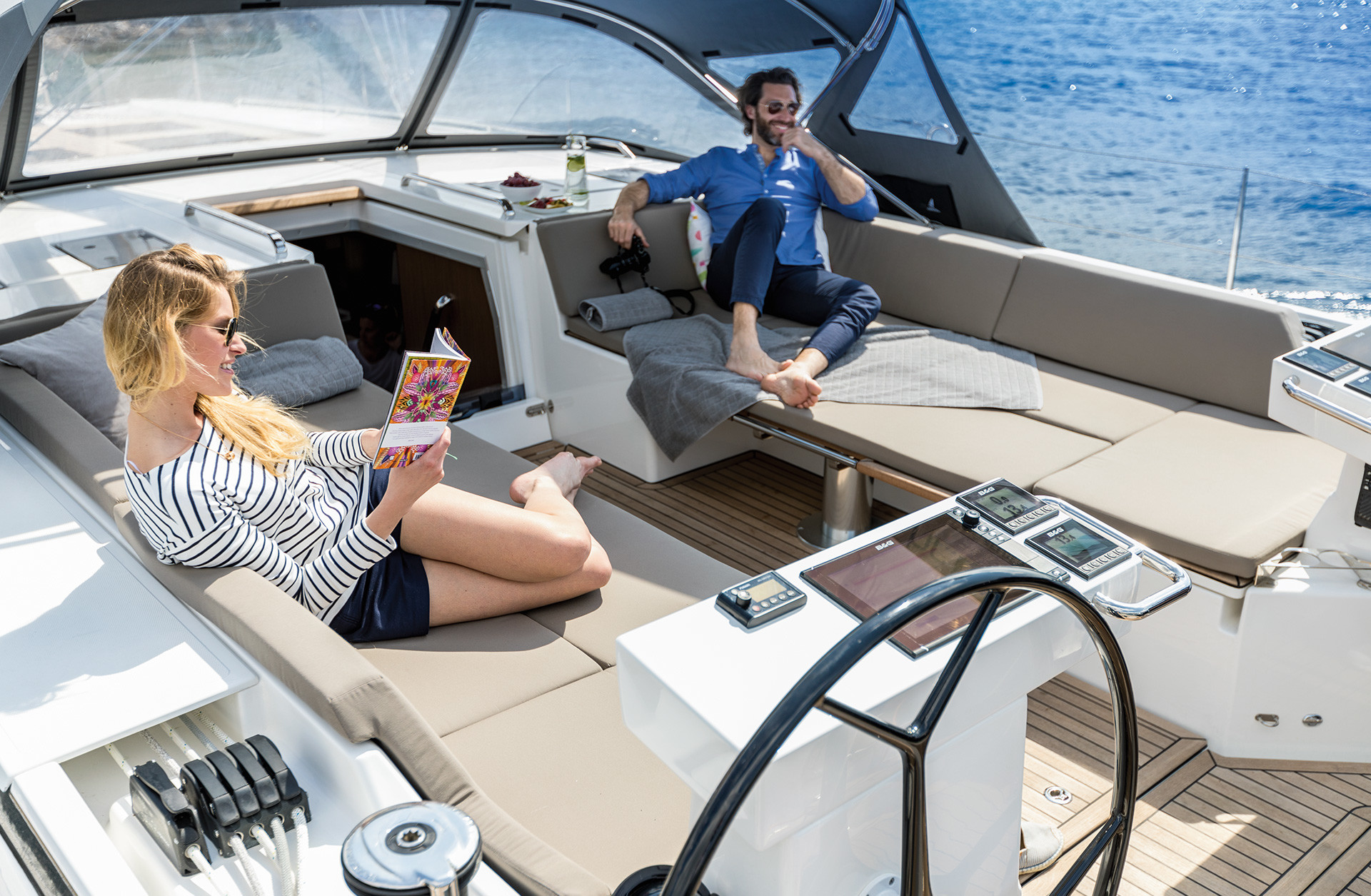 Three stairs on each side lead to the foldable platform which makes a nice swimming area when lowered. The aft hides the tender garage which is suitable to store a fully inflated Williams Jet tender. The area ahead of helmstands belongs to the guests. Two tables on each side of the cockpit can easily be turned into generous lounge area or the first sunbathing area. Second sunbathing area is positioned to stern from the foot of the mast, while the third one is just in front of it, to the bow. The access to the saloon is through wide and not too steep companionway.

Interior design is taken care of by Croatian Pulse Yacht Design that created adorable, spacious and light interior, cleverly using every inch of the space. First of all, let’s notice that the saloon is 88 m2 large which makes it the largest living room in the class. What catches the visitor’s eye on the first moment is the lighting – a smart combination between large hull windows and skylights with interior LED ambient lights and spotlights.

Separate lounge area with an extra-large sofa is positioned to starboard following the chart table, while a large saloon table on the opposite side can easily be converted from dining place into the extended lounge area. Large and well-equipped galley divides the saloon from the front cabin(s).

Bavaria C57 is propelled by an 80 HP Volvo Penta with saildrive. Tanks capacity is divided between 650 L of water and 500 L of diesel. Bavaria C57 named Be Luxe docked at ACI marina in Split, Croatia stands out with its elegance and marine blue hull, while sailing and living aboard Be Luxe give the sense of a megayacht. General conclusion is that cooperation between Bavaria, Maurizio Cossutti and Pulse Yacht Design succeeded completely.