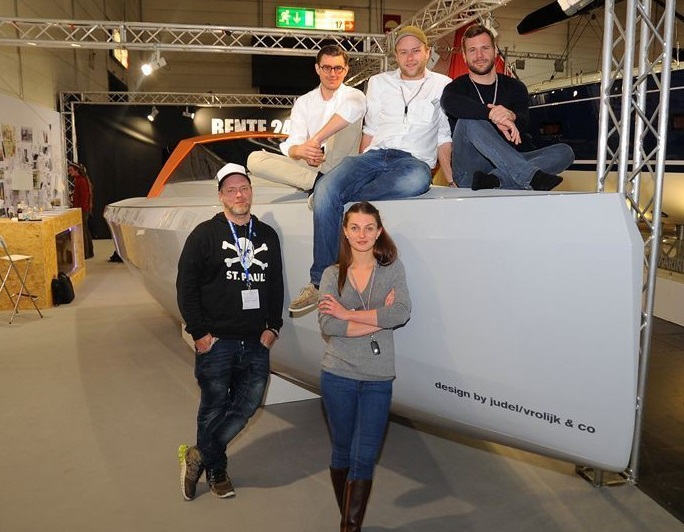 A group of friends found themselves drinking some vine and discussing small sailing yachts. Michael Adlkofer, a professor of design from the University of Hannover, got into the picture, gathered 18 students of product design and soon the project officially began. The entire team took on a task to find new and innovative ideas for their virtual sailing yacht. After a successful presentation at the University, they created a Facebook account, where they would get ideas from the public. As the time passed, they started to receive useful ideas, not only from sailing enthusiasts, but also from industry professionals. Finally, several respectable shipyards became interested in building the yacht. As it turned out, the owner of the shipyard eventually chosen to build the yacht was one of the first Bente’s followers on Facebook. Step by step, the yacht was developed as the result of a joint effort of friends, followers, experts and investors. The process of making a yacht was filmed and published online. The prototype called Bente.one was shown at boot Düsseldorf boat show, and is now back in the shipyard for final works and tests. The first Bente is expected to be sailing as early as spring 2015. The initial idea was to build an innovative, reasonably priced and sexy 24-feet-long yacht. At the end of the process, the Bente 24 turned out to be a quick cruiser with a generous sailing area, which consists of a 22m² mainsail and 11m² jib. LOA is 7.55 m, while its width is 2.75 m. The draft ranges from 1.5 to 1.8 m, depending on the version. The full technical data is not yet available, but I have noticed one interesting detail that describes the development project. Although the hull design is undersigned by the renowned Judel/Vrolijk studio, the other segments of the yacht were designed in a rather unusual way. Following the philosophy to think outside the box, the Bente 24 was constructed from the outside to the inside - first sailing, than living.[yb description="Charter a sailing yacht and take your friends and family to an unforgettable sailing destination! The design procedure is illustrated the best by the example of how Zili Want, a guest student from China, got into the project. He introduced himself as a person completely uninterested in boats, but he studied table solutions on numerous yachts and found them all - stupid. He then got the task to develop a table most suitable for the Bente. The other students had also never had anything to do with sailing boats, but they contributed to the project with their ideas because they were not limited by the usual way of thinking when it comes to designing a yacht. We may conclude that the final product will be the result of the “mental freedom”. I cannot wait for the latest news about the Bente 24, and, because this story sounds so good, I would really like to sail her home one day. Respect! If you are interested in similar yachts, visit Sailboat Charter Deals for more information. I wish you a calm sea, a fine wind and a strong mast!
Bente sailing yacht review