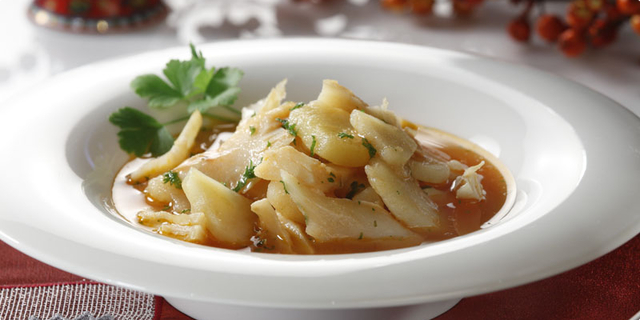 Winter time, especially Christmas Eve for many Dalmatians brings similar associations. In my case they are linked with some almost forgotten scents and still living customs. Christmas time in Dalmatia is impossible to imagine without codfish and some specialties made of it. Along the Croatian Adriatic coast there are many traditional recipes for preparing codfish, ranging from codfish paté to different varieties of codfish stew. The best and the only meal I can imagine for Christmas Eve would be codfish stew, prepared in a way my grandma used to do it. Traditionally, codfish comes to our stores imported from Scandinavian countries, not fresh but air-dried. My grandma used to prefer Norwegian, but I tried to prepare this meal with Icelandic and it was also good. This adventure begins with soaking dried codfish in the water. Make sure that you cut the codfish in peaces small enough to fit the container you are about to soak them in – I usually do it with a hand-saw. The total period of soaking should not be shorter than 72 hours so make sure to place the soaking set away from the noses of your neighbors or sensible family members – I usually do it at the balcony or terrace in case the air temperature does not go below zero. Don’t forget to change the water twice a day – in the morning and in the evening. The most delicate moment after soaking is cooking so extra care is to be employed at this moment. Soaked codfish has to be cooked in fresh water and cooking has to be strictly monitored – remove the pot from the fire at the first sight of boiling! When you did so, be prepared for the most painful moment of this project. Codfish has to be cleaned from the skin and bones and the best way to do it is by your own bare hands, best before the codfish becomes cold, sticky and hard… Put pure codfish flesh aside and prepare a large pot for the finishing stage of preparation. Before lighting a fire make sure that you have prepared enough tiny sliced garlic and parsley. You can’t cut too much of it because you really need a lot. Put enough olive oil to cover the bottom of the pot and start to add ingredients in layers – one layer of garlic, one layer of parsley, one layer of codfish flesh and one layer of sliced potatoes. Repeat this action until you run out of ingredients. Add some more olive oil at the end or you may add it as you make layers. Start the fire under the pot and add some water the codfish was cooked in at the moment when you hear simmer. Afterwards add as much fresh water as is necessary to cover the ingredients. The stew should be cooked for hours on the lightest heat possible. You should be able to see small tiny bubbles close to the plates of the pot. During all time of cooking you should remove the foam which will appear after a while. It is forbidden to shake the stew! You also don’t need to shake it. Ground salt and black pepper should be added during the cooking, as well as few pieces of peppercorn. The stew will be finished when potatoes are cooked well. Try to prepare this dish with so called ‘red potatoes’. This type is pretty solid and has dark pink or reddish skin. Some twenty minutes before you think it is finished put a soup-spoon of honey in the middle of the pot or just add a handful of raisins. Honey or raisins are not there for taste but to neutralize some unpleasant acids from the codfish – that’s the secret… This dish is first and only food we used to have on Christmas Eve, since tradition of the family dictates fasting and abstinence from meat the day before Christmas. According to my experience Christmas codfish stew gets better the more times you warm it up in upcoming days. Therefore, not only Christmas Eve but also the entire winter time is traditionally enriched with tastes of codfish. I wish you a calm sea, a fine wind and a strong mast!
codfish cooking aboard Croatia Dalmatia sailing recipe