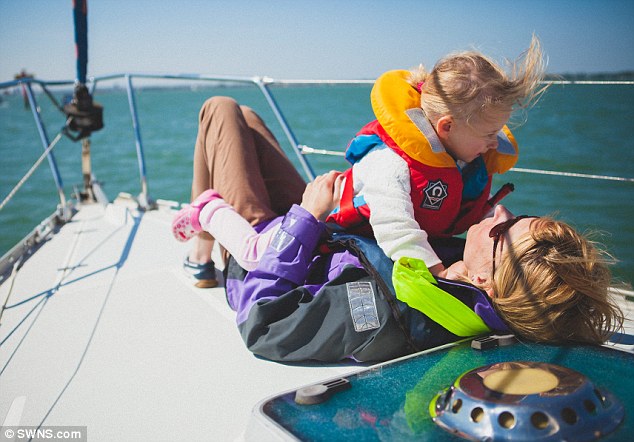 This is a story about Kim and Simon Brown and their three years old daughter Sienna. Kim used to be one of the most successful women in the world building her business career in the period of the worldwide financial crisis and recession, growing her company Smart Currency Exchange Limited. After achieving the target of a £500,000,000 GBP/year turnover in her company, she questioned her life and purpose and decided to make a turn. Rather than putting money, business success and society norms on top of her list, she sold her shares of the company, gave away most of her property and purchased a yacht. Afterwards, she gathered a crew and is about to sail off to sail around the world within 3 years. The permanent members of her crew are her husband Simon as a skipper, herself as the chief engineer and their three years old daughter Sienna as the deck hand. Keith Brown, skipper’s father will be joining them as a part-time deck hand as well as Loryn Benett, Kim’s young cousin as a hostess. Photos of this journey will be taken by Eneka Stewart, family friend and renowned photographer. Kim and Simon are experienced sailors as they used to sail years before deciding on the circumnavigation. As soon as everything was ready to take off Kim and her husband found themselves as a target of unpleasant public criticism when Kim announced on her website that she intends to take Sienna along. A bunch of stupid questions such as Is it safe to sail with such a young kid? Will she wear a life-jacket? Can she swim? etc. Afterwards, more serious accusing questions appeared from What if she got sick? What if she needed a doctor? to What about her education? How will she incorporate with other children when you get back? Even some NGO’s fighting for children rights commented her decision with criticism… However, Kim wasn’t discouraged by the criticism she faced replying that her daughter will gain advanced social skills by socializing with adults and her parents in the first place. Let’s not forget that young Sienna will be surrounded by her parents physically round the clock fort at least three years. She will be educated by her parents instead of kindergarten staff, nanny or a babysitter as many kids are these days. Otherwise, she will not be given a chance to bully and be bullied. As for safety on board, what could be better than skipper’s attention, especially if we take into the consideration that the skipper is dad? However, the Browns were not discouraged by the criticism and took off. They are aboard their beautiful Oyster 56 called Britcan, as a combination of BRItish and amerICAN (Simon is British and Kim is American). They are in Gibraltar at the moment, intending to sail the Mediterranean before crossing the Atlantic in November. You can read a lot about the entire project and Kim’s thoughts following her blog at www.sailingbritican.com. I wish you a calm sea, a fine wind and a strong mast!