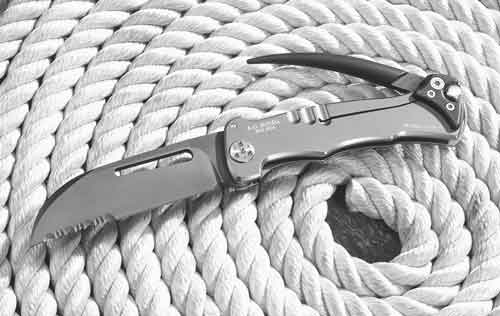 When I first entered serious sailing and started to observe experienced sailors’ gear, clothing, behavior and overall appearance I noticed that some of them wore knives on their belts. It instantly reminded me of Wild West cowboys whose trademark was their Colt on their hip. Sometimes I noticed that they do not wear the knife but it is attached to some easily reachable part of the deck of their yachts. It is not possible that sailing is a violent sport… no way, it’s gentlemen’s sport. But what is that knife doing close to those big guys?! The answer came when I was a part of the crew on a long distance non-stop sailing regatta. During the night one unexpected gust of wind made confusion among sleepy crew and some ropes got stuck, threatening to break our spinnaker. In a blink of an eye, an experienced skipper cut the sheet preventing the boat from being capsized and the spinnaker from being broken. Shortly after that event the agile crew had to deal with damage and mend some deck gear using knives and their multiple features. Afterwards, along with experience and education I learned that the most useful feature of a sailor’s knife is sharp and saw shaped blade for fast and efficient cutting of ropes. Second most wanted feature of a sailor’s knife is the pliers to unscrew rusty shackles or similar bolts or screws. Some knives are equipped with some sorts of screwdrivers and imitations of wrenches but that features come into the second plan. There are all sorts of Swiss army knives designed for sailors, customized for deck use but as I noticed, those made by Leatherman are the most adored by sailors I respect. Leatherman multi-tool knives are made in many shapes and sizes but most efficient ones would be those made of stainless steel and light but durable metal parts. Apart of sharp blade and reliable pliers, a good sailor knife should be equipped with wire cutter, scissors and screwdriver. Some would say that a bottle opener would also do well as part of sailor’s knife… I wish you a calm sea, a fine wind and a strong mast!
gear review