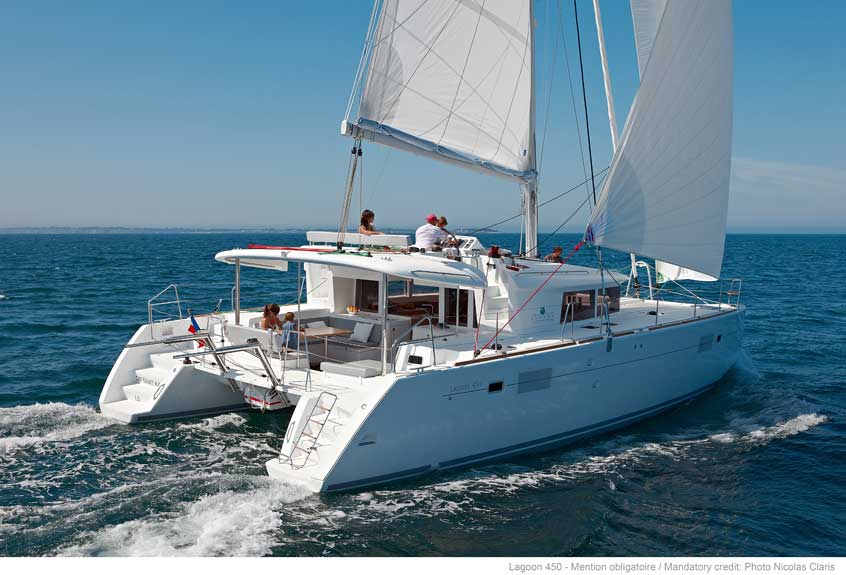 Sailing experts and charter fleet managers predicted a prosperous future to the successor of the multihull Lagoon 440. The new Lagoon 450 was designed to be a bit larger than the ‘small sister’ but appears much bigger due to use of a number of innovative improvements. Lagoon 450 is 13.96 m long overall and 7.84 m wide which does not take her in the class of extra large catamarans, but its comfort and large voluminous spaces make her seem much bigger than she really is. Some critics claimed it was risky to develop a new vessel after the successful Lagoon 440, but the risk paid off. Sales results and the popularity that Lagoon 450 gained at the marketplace in the segment of charter in the first place proved that it was worth taking a chance and gambling a bit. In describing Lagoon 450 we should begin with the top. The helmsman is located in the middle of the hardtop deck where all commands are positioned, making the skipper absolutely independent. Such arrangement allowed designers to create spacious sunbathing surface just in front of the skipper, while the cockpit below him accommodates the crew in their full number. The only disadvantage of such arrangement is that the skipper has poor visibility to the stern when maneuvering but new versions of Lagoon 450 are equipped with windows on the hardtop which allow the skipper to communicate with the aft areas. Charter versions of the Lagoon 450 are most often equipped with several external refrigerators positioned in the cockpit and the space just in front of the saloon, aft to the net between the hulls. The galley and the saloon can also accommodate the entire crew around a big table and on the sofa. Four double cabins along with four toilets and showers are distributed two in each hull. Skipper and hostess can use separate cabins in front of each hull, equipped with toilet and small sink, depending on the version. The table in the saloon can also be used as a bed if it is a charter version with a folding table. Lagoon 450 is equipped with mighty tanks for fuel and fresh water, each containing some 900 l, while luxury versions can be equipped with fresh water maker. Since the Lagoon 450 belongs to the luxury segment of sailing, it is most often equipped with a generator to power the air conditioner and other luxury electric devices such as dishwasher, washing machine, ice-maker and fresh water maker. See for yourself why charter catamarans, especially Lagoon 450, are so popular and book your week starting from SailingEurope Charter base located in Croatia, in the village Rogač on the island Šolta. I wish you a calm sea, a fine wind and a strong mast!
catamaran review Lagoon