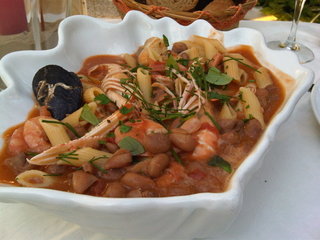 Cooking beans in Croatia is the most often linked to rich stews with sausages and dried meat or bacon and hot peppers - which is typical continental food (but also adored among people living at sea). That's why merging typical continental food with fish and seafood would seem pretty impossible and ridiculous. And that's also why I smiled when I was offered paštafažol na brujet, thinking it's about a Fool's Day joke. Paštafažol in Dalmatian dialect refers to beans stew with pasta - the word originates from Italian words for beans - fagioli and pasta. Brujet (or brudet, brodet) is also a word from Dalmatian dialect meaning a 'fish stew', very specific for Eastern Adriatic, also originating from Italian word brodetto or brodo (meaning the soup), while French call it bouillabaisse. However, when I realized that people who offered me this impossible combination, I decided to smile less in the future and kindly accepted their offer. Allegedly this dish originates from Portugal where Croatian seafarers have eaten it and brought the recipe to islands Vis and Lastovo. I certainly recommend tasting it when you sail to these islands but it's also not too complicated to be prepared on board. First of all you need beans which you have to cook. If you use fresh beans you need to soak it in the water at least one night before cooking. Tinned beans could be used without soaking. Usually we cook several kinds of fish for brujet, inevitably grouper (red fish or scorpion fish) or conger along with different small fish which make the base for stew. For this occasion the best fish to cook would be cartilaginous one - shark, frogfish or similar along with small octopus and cuttlefish. Those kinds are very tasteful, easy to clean and cook and are pretty often available at fish markets along the coast and islands. Let's get back to the kitchen! Cook the octopus or cuttlefish in the water with some salt added. While octopus is half-cooked (the flesh becomes softer) cut finely the onions and put them on not too hot olive oil. When they become slightly yellow and glassy cut half-cooked octopus and place it over the onions. Save aside the water left after cooking octopus. Add minced pepper, finely cut parsley, one dried bay leaf, fresh rosemary, salt and pour 2 dcl of dry white wine over it. When the wine evaporates it is time to add peeled tomatoes (tinned ones) and some chili if you like spicy. Leave it simmer until tomatoes crumble. Now put pasta, preferably penne or macaroni, inside the stew and add the water left after cooking octopus. Mix the stew and add the beans and put fish fillets on top. Add salt and pepper if necessary. From now on you should not mix the stew any more. Reduce the fire under the pot and shake it holding handles from time to time. Your paštafažol na brujet is ready to be served as soon as pasta is cooked. All ingredients needed are available at local fish markets and stores while there are plenty of herbs and spices growing around the coast and islands - bay, rosemary or oregano could be found all over the place… However, I would recommend to charter a yacht in Croatia, to taste this dish in one of Vis or Lastovo restaurants and ask local chefs for advices prior you decide to do it yourself onboard. This dish is equally tasteful served both with white or red local wine. I wish you a calm sea, a fine wind and a strong mast!
cooking aboard sailing recipe

Top 10 Greek Food Everyone Should Try

What to Eat When Sailing: 13 Simple Meals Ideas for Your Sailing Holiday