This episode happened last summer, at the end of an ordinary charter sailing week. I was a skipper on a chartered catamaran, sailing with a family – parents in their mid-forties and two teenage kids. The week was pretty relaxing as my customers were not too demanding. Mother and father spent most of the time taking a nap, sunbathing, solving Sudoku problems and occasionally swimming. Kids spent all of their time with their headphones on and staring at their smartphones or occasionally reading thick books.

During the cruise, we usually anchored in close to the island villages and cities as my customers did not want to spend their budget on marina fees, while they probably felt more relaxed at the anchor. However, the week went pretty smoothly, with a nice weather and enough wind for easy sailing.

The last day I sailed towards the base, aiming to drop the anchor at the bay nearby a final swim. The bay wasn’t too crowded since the wind was increasing. I decided to stay there despite the wind because the anchor held sandy bottom pretty well. My plan was to leave the place as soon as the wind increases to the moment when the anchor is not safe anymore.

I raised the anchor explaining that we are about to change the position because the wind gets too strong. My intention was to set the sails again and make another stop at the bay closer to the base and spend the rest of the afternoon there swimming and snorkeling.

As I started unmooring I noticed a neighboring catamaran moving rapidly sideward while women on board were shouting and waving. At first, I did not understand what was going on until I spotted three men swimming towards the catamaran trying to catch it and also shouting something to me. It took me a second to start acting in a good seamanship manner. Instinctively I estimated that their anchor did not hold and that the wind is pushing their boat off the coast. OK, I said to myself, those people trying to catch it are in greater danger than their boat so pick them up and try to catch the catamaran afterward. I steered my catamaran towards them and picked them up within two minutes.

They tried to explain to me what happened and what to do now but as the result of shock and exhaustion, they forgot that I do not understand their specific German dialect. Especially not when pronounced while spitting large amounts of seawater out of their mouths. Nevertheless, I chose to speak with the person who seemed the strongest and less stressed. I managed to explain to him that I would try to get as closer to their yacht as possible and he would have to swim to it and try to get the control over it.

As soon as we started with a maneuver their tender detached and started to flow uncontrolled. We managed to pick it up very quickly and I thought that it would make them easier to catch their catamaran. My calculation turned up very wrong as soon as I realized that the key to the tender engine was inside the chart table of it mother boat. However, the person I have chosen earlier managed to swim to their catamaran and get the control over it. I explained him to navigate the vessel to the nearest bay and to try to drop the anchor there. He did so and we were able to transfer their tender and remaining crew to their catamaran. I could not drop the anchor there so I maneuvered with my engines while everybody was in their place. 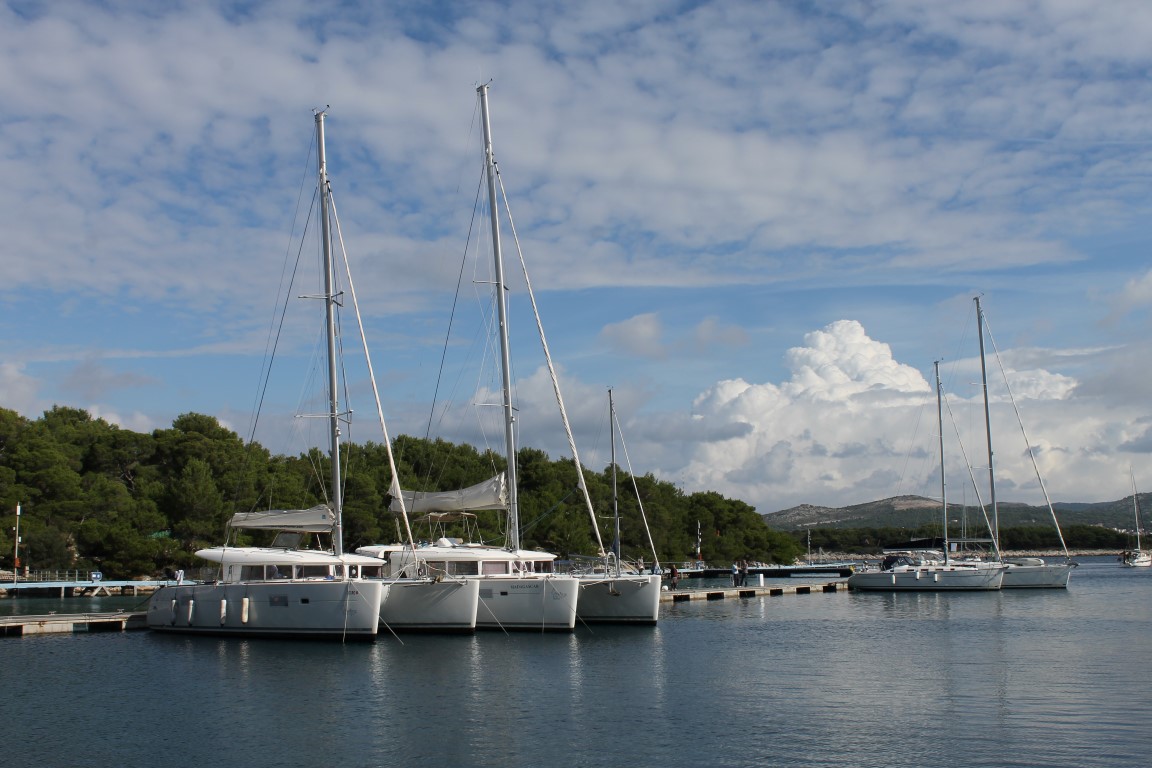 During the entire rescue action, my customers were too impressed to do anything and I did not have time to explain to them how to help because I had to react in a moment. At the end of the action, I was happy that everybody was OK and uninjured while both catamarans were not damaged. Happy about the outcomes I wanted to explain to my customers what was going on and what safety regulations say about it. As soon as I started explaining the father started yelling at me in his French dialect and got in his cabin leaving me without explanation. Still confused, I continued sailing towards the base and tried to forget the incident with my customer. Few minutes later his wife appeared with a glass of water and remorseful smile on her face… Her husband was frustrated because his last afternoon of sailing week was spoiled. He was probably disturbed while solving Sudoku and heaving a nap which was more important than human lives and valuables at sea. OK, we obviously don’t share the same values…

I only wanted to explain him several basic lessons about the life at sea and good seamanship. First of all, anchoring is a skill, not just a manoeuvre. When anchored, a skipper is obliged to check out the anchor and make sure that his vessel is not moving by observing solid objects in the area. If leaving the yacht, skipper has to make sure that he is able to get back quickly in case of unexpected event, or he has to delegate a crew member to keep watch over the anchor. Secondly, the key to the tender has to be placed in the engine when tender is in the sea. And last but not least, a good skipper would always observe the situation over the neighboring yachts when anchoring at the same bay. Therefore, skippers’ obligation is to help others whenever they can without compromising their own vessel and crew. These rules really are pretty simple and basic but self explanatory so I still do not understand why someone would be angry if spent some half an hour of their sailing holidays saving someones life…

Although this story and rules applies to all the boats sailing catamaran does differ from  out more about sailing aboard charter catamarans on our specialized page Sailing Catamaran Yachts.