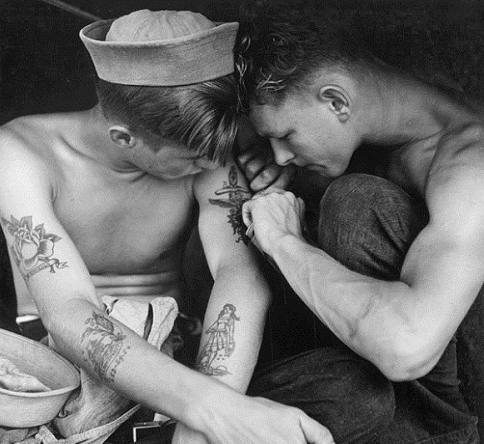 “Have you seen my new tattoo, isn’t it beautiful?”, that’s what I heard as soon as I arrived at my niece’s 18th birthday party. Firstly I was a bit shocked by the fact that my little niece is so grown up and afterwards her decision to get a tattoo shocked me again. Apparently, tattooing became normal among modern teenagers and only ‘conservative old farts’ like me could be shocked by that. It is probably because I believe a tattoo is not a decoration but a symbol and has a deeper meaning, important to the ‘holder’ of a tattoo. However, my niece surprised me with the explanation of her tattoo – it looks like a crown which symbolizes the bond with her beloved sister whose name is a synonym for the word crown. I can only imagine what younger niece’s tattoo would look like when she turns 18 since her sister shares the name with a brand of sparkling water… Nevertheless, the appearance of the tattoo in my closer family reminded me on the seafarers’ fashion of tattooing. Tattooing itself was known since the earliest days and means a specific form of communication in many different civilizations, cultures and subculture groups in modern times. If we take sailors (seafarers) as a specific group we could discuss their tattoos as specific. However, originally their tattoos have always been much more than a decoration. Cartoon character Popeye the Sailor as well as Sir Winston Churchill had an anchor tattooed; one on his hand and the other on his right biceps. This tattoo not only symbolizes the bond between the owner of the tattoo with the sea, but also the safety the anchor gives to the ship and her crew. Furthermore, according to an old tradition, only sailors who have crossed the Atlantic Ocean have been allowed to put an anchor tattoo. Tattooed topsy turvy turtle meant that its owner had crossed the Equator, while tattooed dog or pig on the leg would save one from a naval accident and drowning. Since 17th century every sailor had to give detailed list and description of their tattoos to his captain in order to be recognized in case of an accident or death at sea. It makes perfect sense if we take into consideration that not many sailors could write and read while any written document would easily be lost in a naval accident. Sailors were the ones who used to tattoo the images of their adventures, while the mermaid was the symbol of their desire rather than their memory. Sailors also believed that wearing the symbol of the North Star would help them find their way home. The research on tattooing tradition among seafarers could take us very far, but it is a fact that probably all of them were made to convey a message rather than to look good on someone’s body. I would certainly think twice before putting a tattoo on my body because it remains for good. Unwanted tattoos are very often the price of visiting too many bars at the port of arrival after a long trip… I will finish this post on this interesting tradition by a phrase that a sailor without a tattoo is like a boat without grog. I wish you a calm sea, a fine wind and a strong mast!
sailing traditions