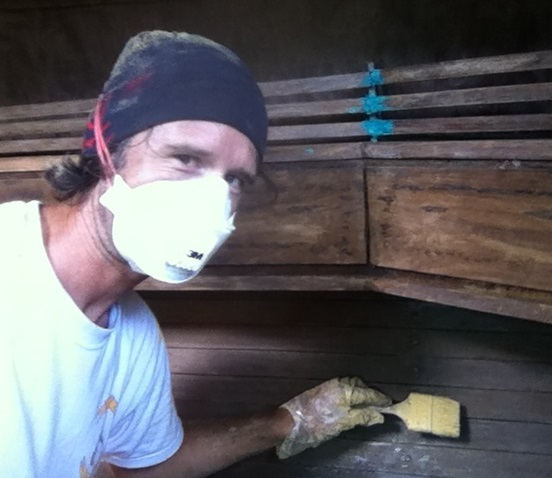 About a year ago, I was invited to a Christmas party at a sailing club in Zagreb, Croatia. Strange but true, Zagreb, a city located in continental Croatia, has several sailing clubs. The one I was invited to is a place where people who love sea gather and share their knowledge and adventures about sailing. The spiritus movens of this group of people is a an interesting guy called Saša, who left his studies and career because his love for sailing and the sea was stronger. After the party, I was told about Saša’s idea to restore Hir 3, the legendary 10 m long sailing yacht, which sailed the world under the command of her master Mladen Šutej. The situation was very difficult because Dubrovnik was sieged very soon after the first attacks. Bloodshed was combined with massive destruction, and it was more important to save your life and and to get rations than to think about your yacht. Mladen, however, managed to make it to the island of Korčula and then tried to reach Dubrovnik in order to save Hir 3. Eventually, he got to Dubrovnik, but it was impossible to get to the yacht, since a demarcation line was set near the marina. Mladen employed all of his professional and private connections, along with diplomatic skills, to reach the marina. A great burden dropped off his back his back when he spotted Hir 3 still floating among other robbed and destroyed yachts. Somehow, he managed to clog a total of 286 bullet holes, start the engine and escape the marina during the night. Hir 3 was saved.Mladen Šutej, about whom I have written in my previous post, is one of those special people who, in spite of everything, follow and accomplish their dreams. Mladen has crossed all the world’s oceans, some of them single-handed, and has visited all the continents aboard Hir 3. His cruises have resulted in six books, hours and hours of video materials, hundreds of photos and newspaper articles. Most of these journeys were done in the 1980s, but were unfortunately stopped when the war in Croatia began. Mladen’s precious Hir 3 found herself in the middle of heavily bombed Dubrovnik in the late summer of 1991. The story continues with an enthusiast who was aware of Hir 3’s fame, and bought it from Mladen. He never used the yacht, so it remained moored in Vrsar and untouched for years. This is where my friend Saša comes into picture. He was walking around the marina and suddenly spotted the legendary Hir 3. He barely recognized her because she was in really poor condition. His next thought was to find the owner and make him sell the yacht. And so he did. Saša found the owner after a great deal of detective work and purchased the yacht. It is literally impossible to describe what the yacht looked like. Saša managed to save the hull, repair the entrance into the interior and make sure that the yacht stayed afloat. Along with his friends, Saša began a long process of reassembling the yacht. Someone would ask: with what purpose? Well, the answer to this is that Saša always follows his caprice (the translation of “hir”), just like his predecessor Mladen Šutej. Saša, too, has documented his experience by writing a blog, which you can read in English. Being loyal to his caprice, Saša plans to sail all Hir 3’s voyages once again. In order to accomplish this, Saša has started a crowd-funding campaign, as well as other activities that will be announced in one of my next posts. I wish you a calm sea, a fine wind and a strong mast!
sailing history