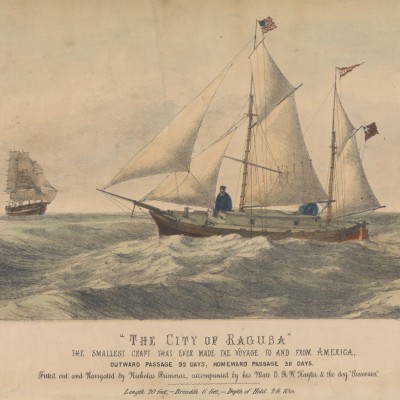 The date June 2nd would be an ordinary date and we would not mention it in context of maritime history if there wasn’t a man called capt. Nikola Primorac from Dubrovnik. He found himself in Liverpool in 1870, in the quest for a better living than in his homeland.

As he was a seafarer he could not resist visiting harbor bars where thunderstorms and waves from his stories are getting bigger with every new pint of draught beer or a shot of rum. Somehow he got stuck in the discussion about crossing the Atlantic and finally accepted a bet for 100 pounds sterling. The bet was about crossing the Big Pond in a small boat.

The morning after, still fighting the hangover, he managed to purchase a boat measuring as follows: Length – 20 feet, Breadth – 6 feet, Depth of Hold – 2 feet 10 inches. It means that he accepted a 100 pounds bet to cross the Atlantic in the boat that is 6.09 m long, 1.82 m wide and 0.86 m high above the water line. The boat once belonged to a whaling ship which was sunk the previous year in the Irish Sea. After refitting and provisioning the boat he decided to take off but some administrative work had to be done before leaving Liverpool.

Since Nikola Primorac was from Dubrovnik, which was under the Austro-Hungarian administration at a time, he spoke with Austrian ambassador asking to allow him navigation under the banner of St. Blasius, the patron of Dubrovnik Republic. After the ambassador declined his request, capt. Primorac decided to sail under a British banner, which was highly appreciated by both the public and the authorities.

The English newspaper published news claiming that it is “…an incredible brave and crazy adventure ever made that could turn into tragedy or triumph”. As a proud patriot, capt. Nikola Primorac did not stager by ambassador’s decline of putting a Dubrovnik banner so he named his boat “The City of Ragusa”, as it is Dubrovnik’s international (Italian) name. The only remaining thing to do was to find a crew for this crazy event. So capt. Primorac visited once again some of famous Liverpool harbor pubs in order to find either the inspiration how to solve his problem or the solution itself.

The solution was called sailor Buckley who was still completely drunk when “The City of Ragusa” left Liverpool harbor on June 2nd 1870, seen off by hundreds of thrilled spectators. Eyewitnesses used to rumor that the only sober character onboard that day was the dog Boswain. However, when Buckley got sober and realized what was going on, he bagged capt. Primorac to disembark him, promising that he would get a substitute sailor. Buckley left the boat in the Irish port of Queenstown and somehow persuaded a Dutch sailor E.R.W. Hayter to join capt. Primorac.

Anyway, capt. Primorac along with E.R.W. Hayter and loyal Boswain managed to cross the Big Pond and land in the port of New York after 92 days of struggling with the storms and high seas. Unfortunately the brave Boswain did not get a chance to ‘mark a tree’ on American soil…

Primorac’s triumph in New York was crowned by an announcement of his intention to sail back the very same way. After 20 days of ‘rest’ in New York City and telling stories in harbor bars, capt. Nikola Primorac took off and arrived in Liverpool safe and sound after 33 days of navigation. Soon after his arrival Queen Victoria congratulated and awarded capt. Nikola Primorac and E.R.W. Gayter, while the “City of Ragusa” was exhibited in the Liverpool Museum until the end of the World War II.

Unfortunately, the boat was destroyed during the bombing at the end of the war but capt. Nikola Primorac remained in history of seafaring as the first to sail across the Atlantic in both directions in the smallest boat in the world.

Earth Magnetic Field – what to know