The more I read about sailing records the more I believe that there is no more room left for new accomplishments. Mankind has managed to exceed the limit of 60 knots of sailing speed on the sailing yacht and windsurfers have broken the limit of 50 knots. The most popular sailing match race yachts are to be handled wearing helmets and all sorts of safety equipment while sailing faster than the wind, etc. On the other hand, the world has been circumnavigated in both directions, single-handedly and without any stops. Sailing boats have made it through the Northwest Passage, and the time to cross a big ocean gets shorter and shorter, just like the number of miles sailed in 24 hours gets bigger. Still, one event that occurred the other day has proved me wrong.

French sailor Franck Cammas, a very well known character from the world of single-handed sailing, and an expert in different formats of circumnavigation and many other things, has made a new accomplishment. He is the first person to round the mighty Cape Horn foiling (flying over the surface) all the way. He did it aboard the small catamaran Nacra F20c along with Johannes Wiebel from Germany as a trimmer. I have never been to the Horn but I have recently spoken with two Croatians who have done the rounding several times. Once, they even did it twice in one day because the weather was fine and they steered their yacht back in order to make some pictures from the dinghy because they were the first Croats to do such accomplishment. One of them did it single-handedly later on. Anyhow, they have told me that “fine weather conditions” around the Horn refers to some 20-30 knots of wind and 2-5 m high waves and that people are lucky to find such weather for a few days a year… The expression “fine weather conditions” obviously has a totally different connotation on the southernmost point of South America than it has in the Adriatic… 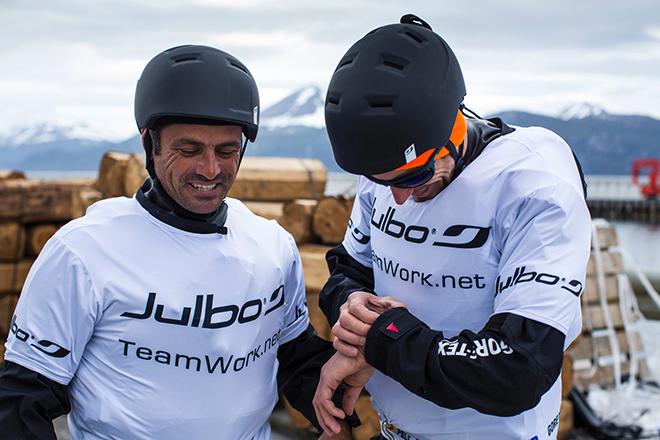 So, Franck Cammas had only ten days to catch the weather window that would allow him to make his third attempt to round Cape Horn. He was lucky and made it with 15 knots of wind and 2.5 m waves. That was his third rounding of Cape Horn, but this time he did it on the smallest boat in his career – the boat was only 20 feet long. This event shows that technology development brings new sailing techniques so new and different records are to be expected in the future. Congratulations Franck!