Catch up with our crew sailing in the beautiful Spanish islands. They got to do some sightseeing and eat delicious Spanish food.
Read Part 3 here!

In the morning, we were in front of Cabo de Gata near Almeria, part time we were sailing, part time we had to run the engine. During the night the starboard engine was on duty, later in the morning the portside one. Sea state was 2-3, partly overcast. The wind from 4-12 knots from the west. From noon on, it was a steady sailing – jibing on the reach. The delicious meal of the day was penne al giardino with a tasty salad. At 6.30 pm, we had to start the engine again.

At 3 am at Cabo de Palos, we could set sails again, and enjoy our night sailing without the engine noise. The breeze was around 13 knots from the northwest, and our course was 054° towards the island of Formentera. There was a constant change between the motor and the sails. Approximately at 11 am, we passed the Greenwich meridian. In the morning, we had a noodle salad with tuna with some homemade mayonnaise. After noon, the wind got more steady, so we could sail calmly ‘till midnight. The meal of the day was spaghetti aglio et olio, with fruit salad as dessert.

At 7 am, we arrived in Sabina, the main harbor of the island of Formentera. We got some fresh bread for breakfast. During the day, we did individual sightseeing and shopping trips. In the evening, we ate at the local hotel, because it was the only restaurant open.

We had our first breakfast on the „patio” of our catamaran-crib. 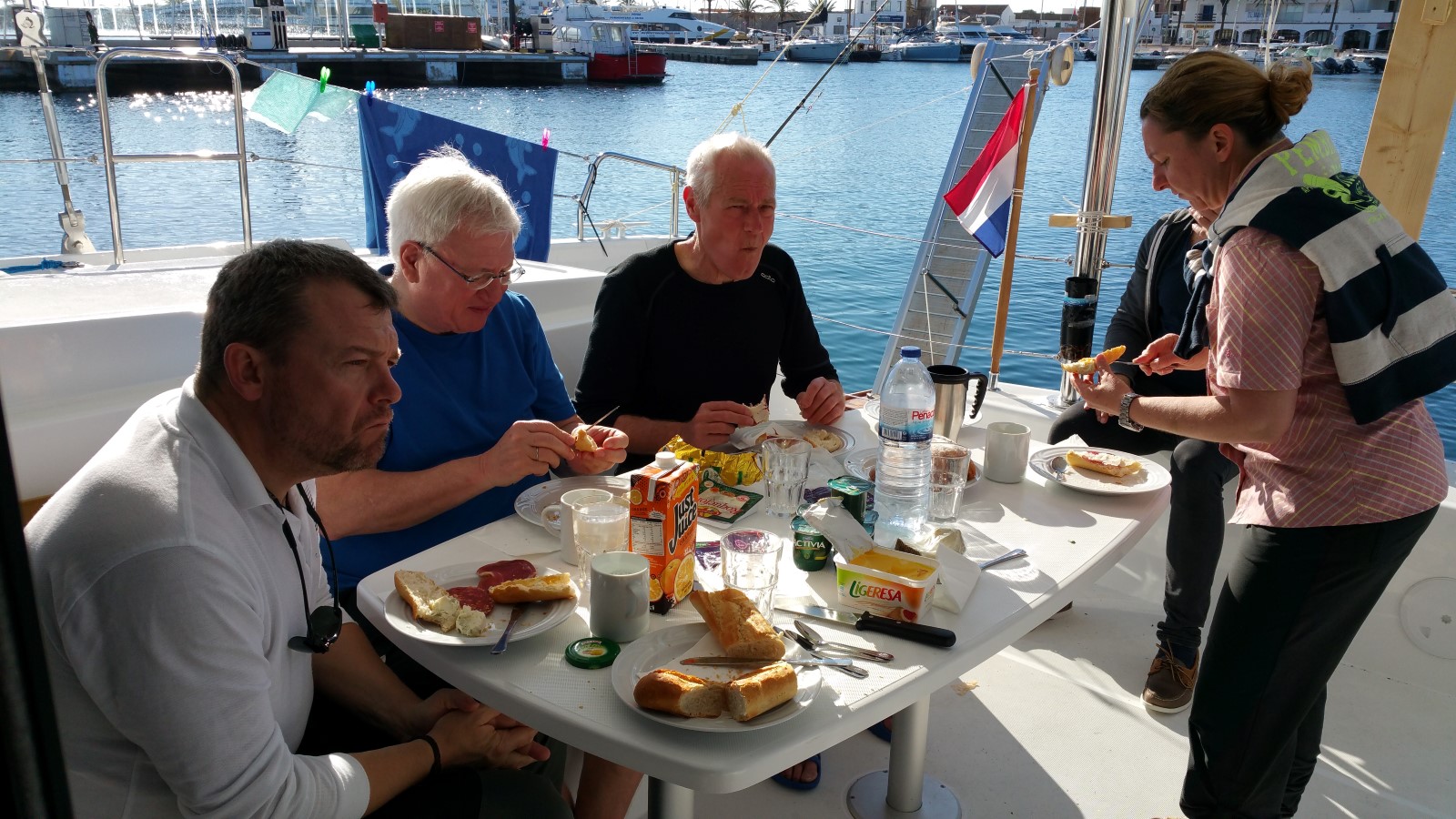 Around noon, we sailed in the bright sunshine 13 miles to Ibiza. In the harbor of Ibiza, an enormous ferry nearly rammed us, even though we steered very close to the adjoining marina to give it enough space. We even got scratched by one moored boat to avoid this ferry. 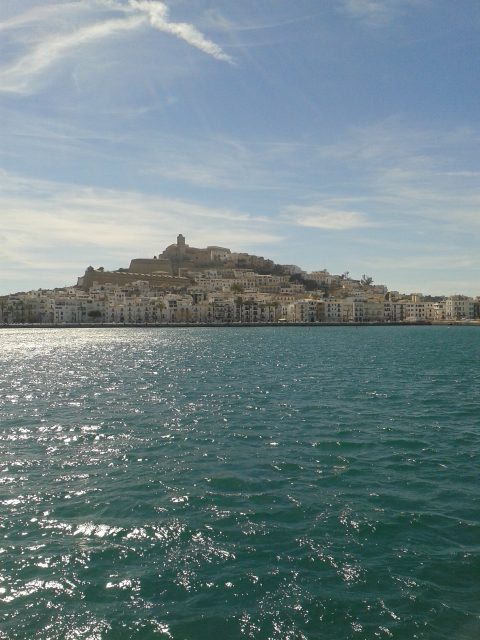 Afterwards, we took individual walks through Ibiza. The city was in the state of spring awakening and preparing for the coming season. People were building and cleaning everywhere, but not many places were open for business. 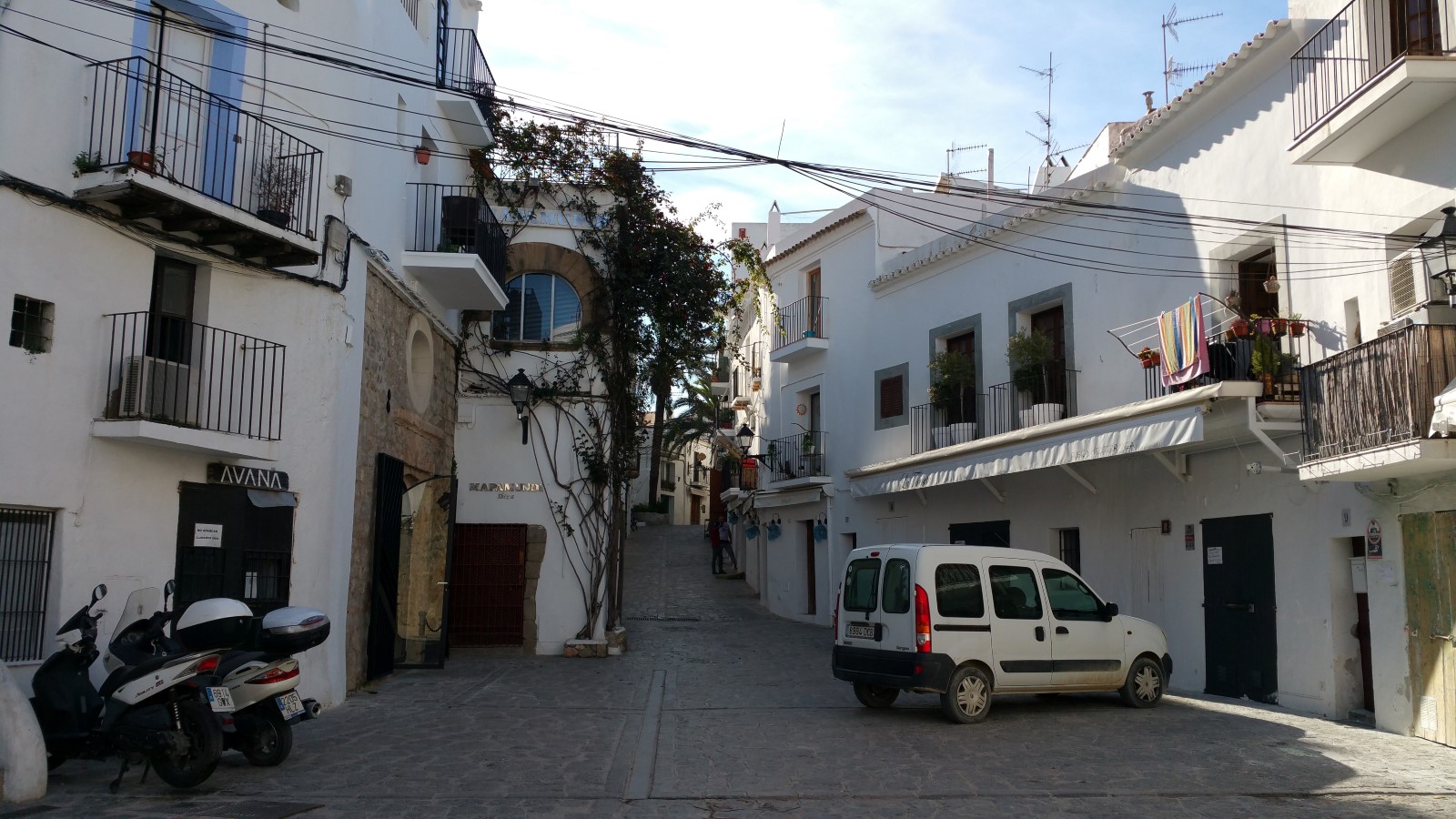 We left Ibiza at 8 am to get to Palma de Mallorca on time. The wind was first against us, but eventually it winded down. At 7 pm, we moored up in Palma Harbor in the Marina Cuarentena. That was leg three of our journey – we sailed 460 nm. In the evening, we had a farewell dinner at a nice restaurant near the harbor.

The old crew left, and the new crew came, so we did some minor repairs and general cleaning. When everybody was on board, we went through our safety and technical instructions, which usually takes us around two hours. Our crew was very international again, and that is always fun. Two Germans (one with Ukrainian roots) a Swiss couple, a Canadian, who has also a residence in Curacao and two Austrians. In the evening, we had dinner at a nice Tapas Bar in the old part of the town.

In the morning, I had my yearly medical check for seafarers, and got a new ENG1 for my English professional license. In the meantime, the crew went to a supermarket to get provisions. The weather report for the upcoming days said nothing good. The whole time easterly winds = against us. So, we decided to sail out as soon as possible, because we should then also have a northern component. We refilled both tanks with diesel to the max to be prepared for all circumstances. 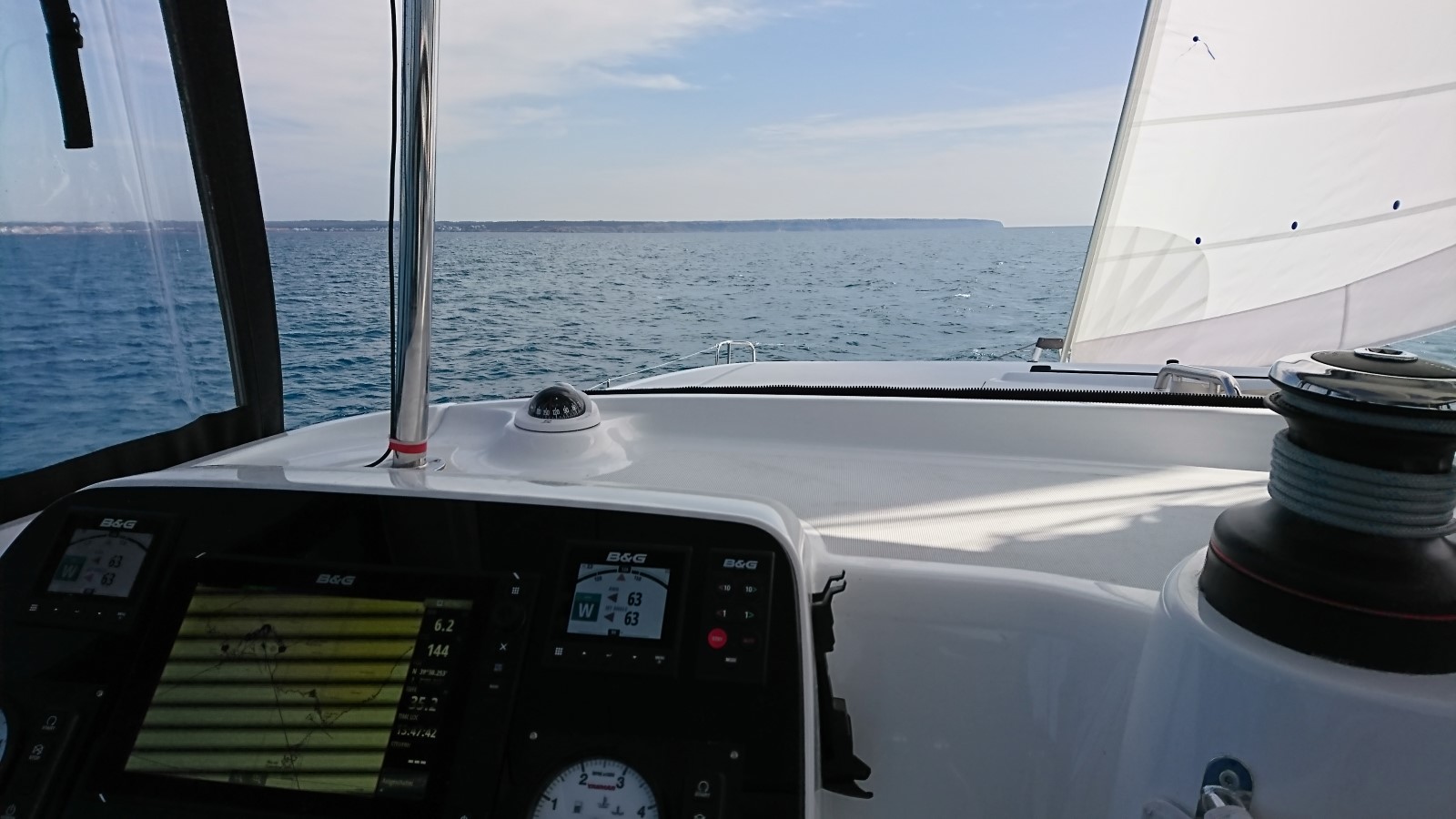 We left the harbor of Palma de Mallorca around 1 pm, and did our reef training. Soon afterwards we set sails, and not much later we stopped the auxiliary engine. The meal of the day were sandwiches, as nobody started cooking on time. We have a rule aboard that even cleaning the dishes should be finished by dawn. 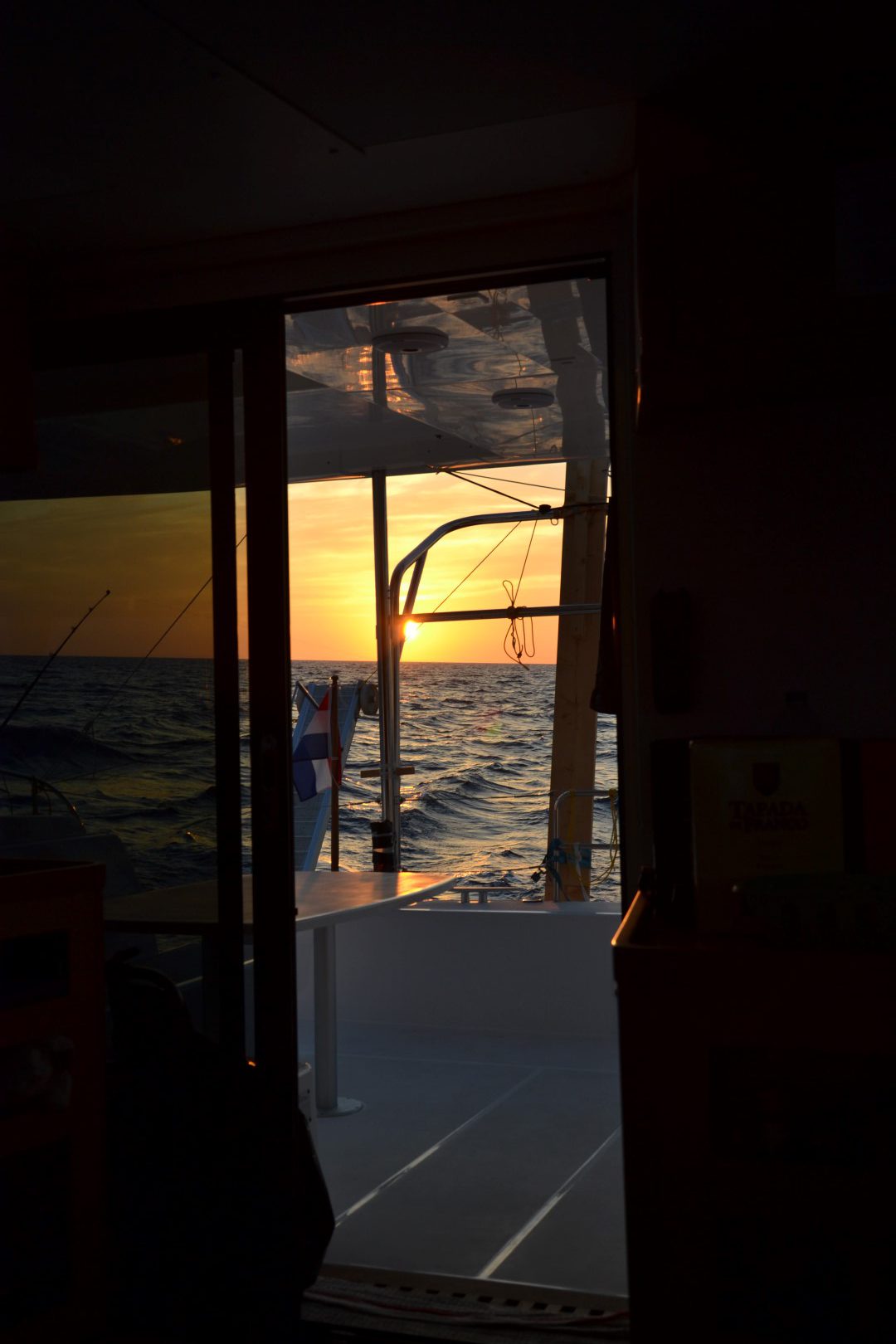 Luckily, the wind was more northeasterly, so we could sail. It got pretty rough later because we had sea state 4-5 from the side.

Check out the fifth chapter of our story!