The crew had some difficulties with the wind and the jib at night, but managed to spend a beautiful day on the island near Sardinia.
Read Part 4 here!

At 1.45 am, we had to bind reef one. We had up to 25 knots of TWS, and our catamaran was rocking and jumping like a roller coaster. In the morning, it calmed down a little bit, but we still had a rather good wind direction. At 7.50 am, we put full sails again. We had “eggs in a basket” for breakfast. Around 11 am, a fish bit on our portside rod, where we had a squid-like lure. Unfortunately, after turning the boat, I lost the fish with the lure. 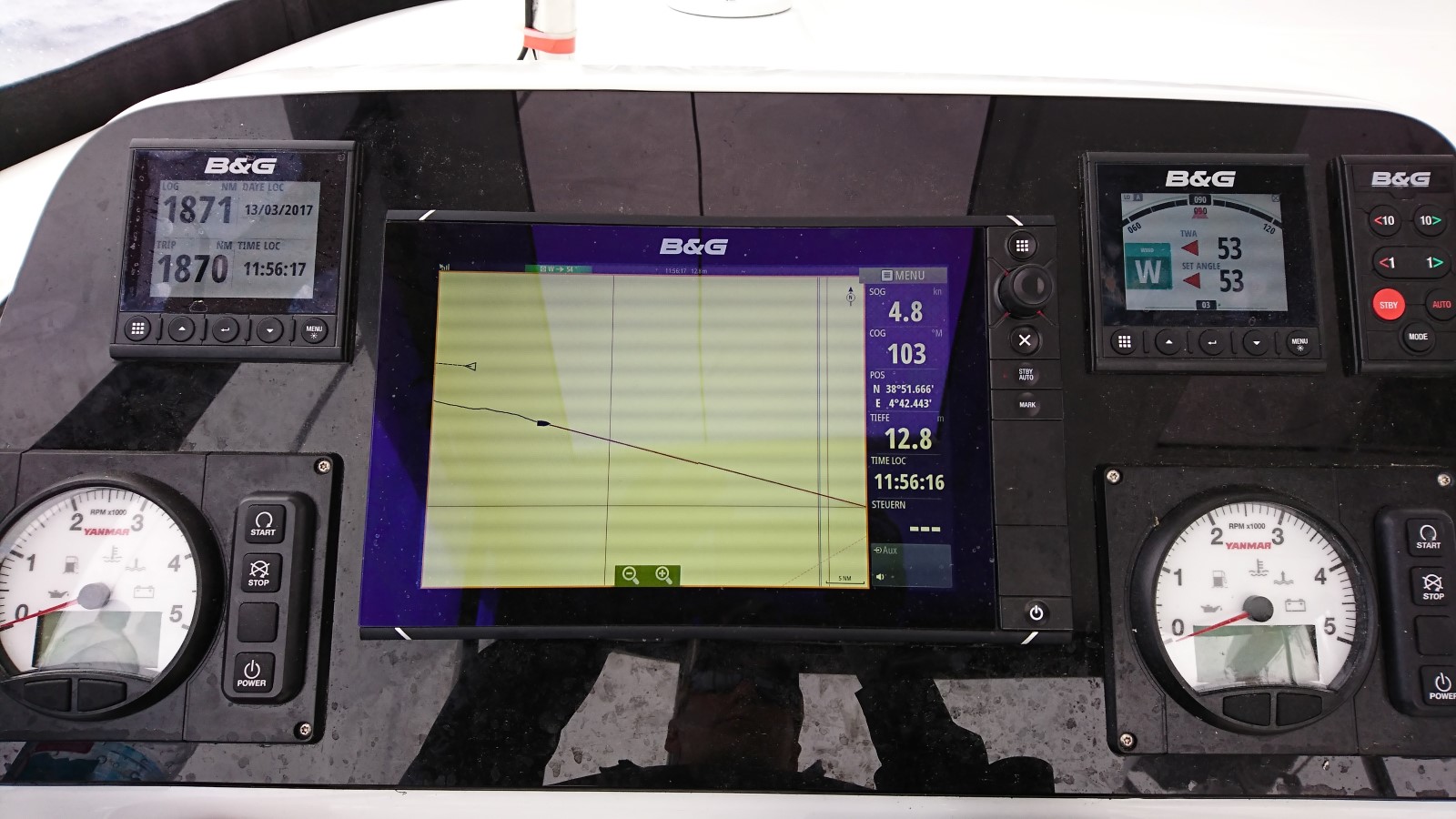 So, no tuna steak – instead we had a potato salad with sausages. During our lunch, a large container ship overtook us and was at a distance of one mile from us. Near the front of the ship, a private jet flew very closely above the sea. Maybe they wanted to see us a little bit closer. So far, it is a nice sailing day, and I´m impressed with the upwind sailing abilities of our catamaran, which is for sure better than any catamaran I’ve sailed in the past. 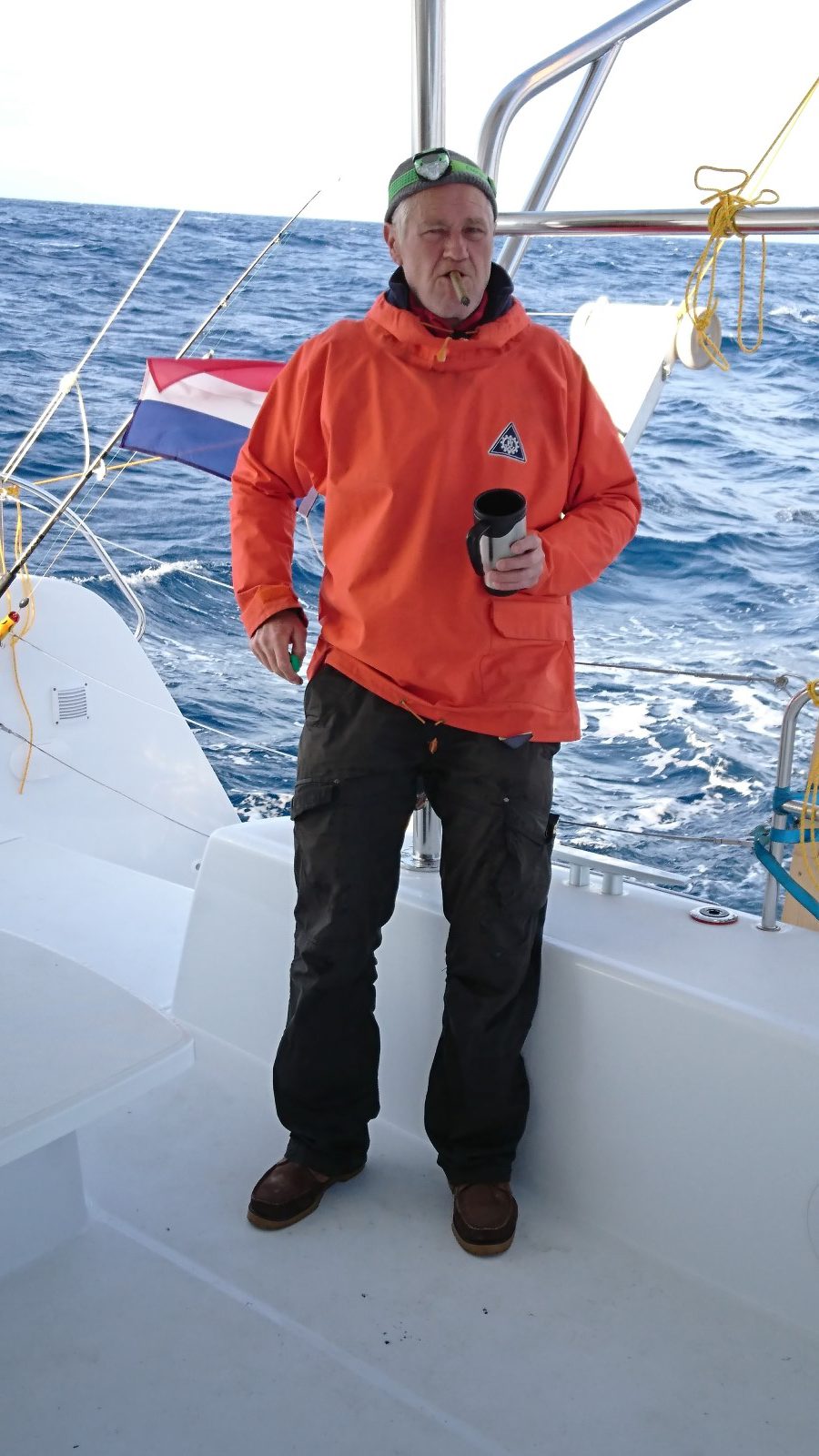 Around 6.30 pm, we reached the”middle” between Mallorca and Sardinia – 145 nm on the Trip Log and 145 nm more to go. At 8.30 pm, the wind direction got up to 070°, which was the planned mark to tack, so we did. Around 10 pm, the crew woke me up, because we had lost a shackle which connects the roller of the jib and the jib. The jib was at risk of breaking. We tried to wind the jib up, but the whole system had come loose. Sea state was 4. Sh*t always happens at night. We changed the course from upwind to a deep reach to make the working conditions in the bow better. Still, it was a very wet job for our two „heroes“. After about 40 minutes, they finished their job. A new shackle was mounted, the jib halyard stretched, and the roller was repaired.

As expected, the wind turned further to the right, and we could sail in a nice „banana“ shape course. In the early afternoon, the wind weakened, and we started our engine again. The positive effect was warm water and the change of batteries after 48 hours of consumption (autopilot, fridges, lights, etc.). The meal of the day was “Zürcher Geschnetzeltes” (stir fry Zurich style) with rice. The night was very dark with nearly no light, so we started the radar. At 9 pm, an orange ball appeared in the dark sky. The moon was rising. 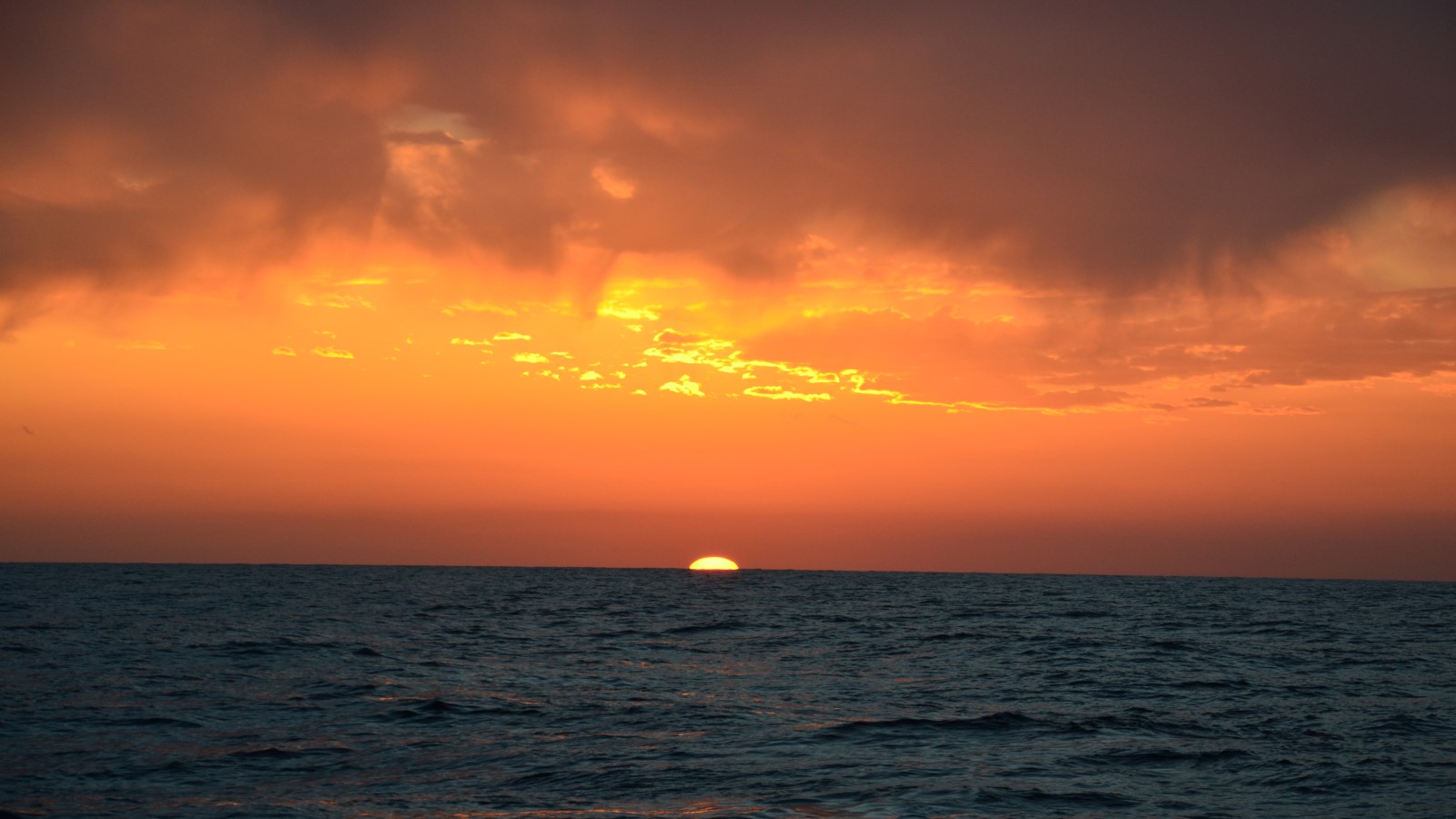 We arrived in Carloforte on the island of San Pietro in the southwest of Sardinia at 9 am. Then we had breakfast and some very good fresh bread. In the morning, we repaired the jib roller. It’s almost incredible how the guys were able to save every piece and screw during the night when the damage happened. So, it took us only about one hour to fix it. In the afternoon, we had lunch on the boat and then took a nice walk in the small town. On Thursday, easterly winds were supposed to be blowing. The weather report recommended staying one more day on San Pietro, because on Friday westerly winds would rise again, which are in our direction. 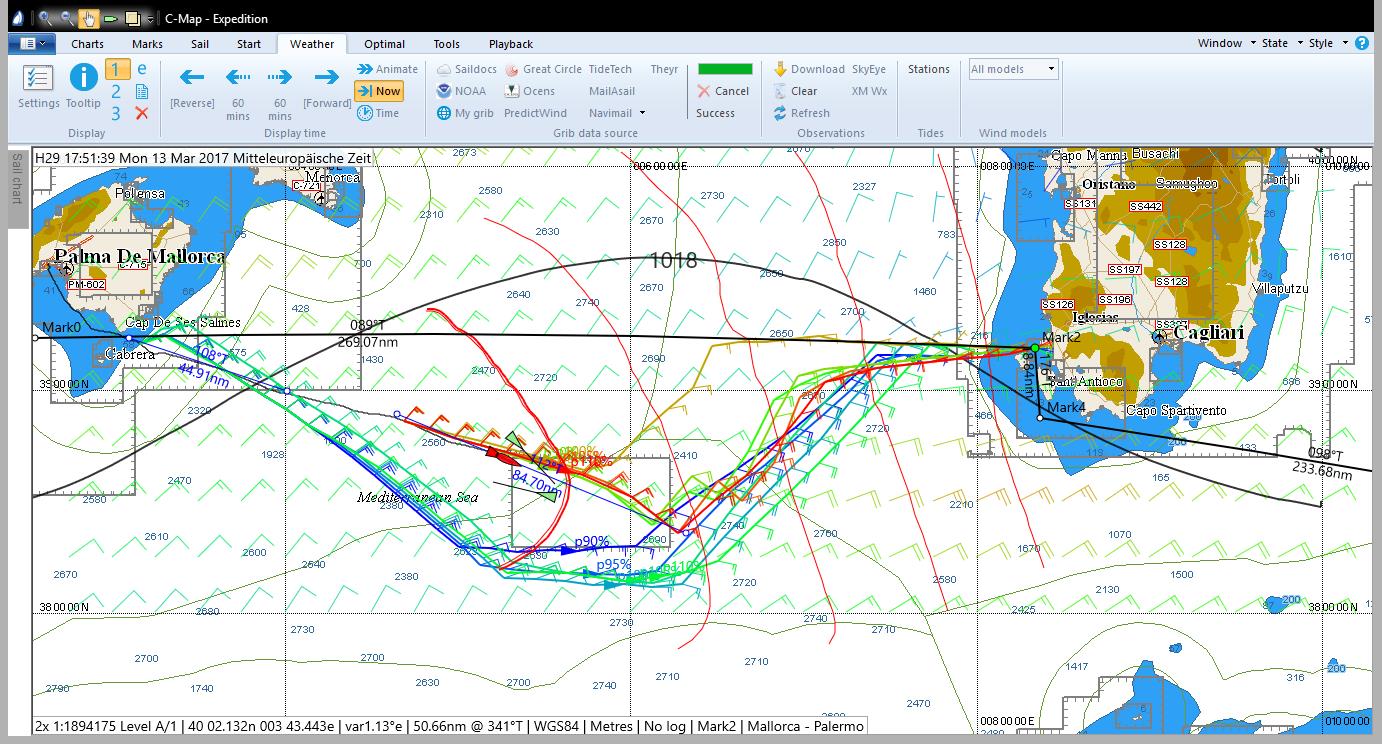 We slept long, had a big breakfast with that very tasty fresh bread. Later, we made plans to rent two cars and explore the island. The cars were wrecks, but cost only €25 per day. 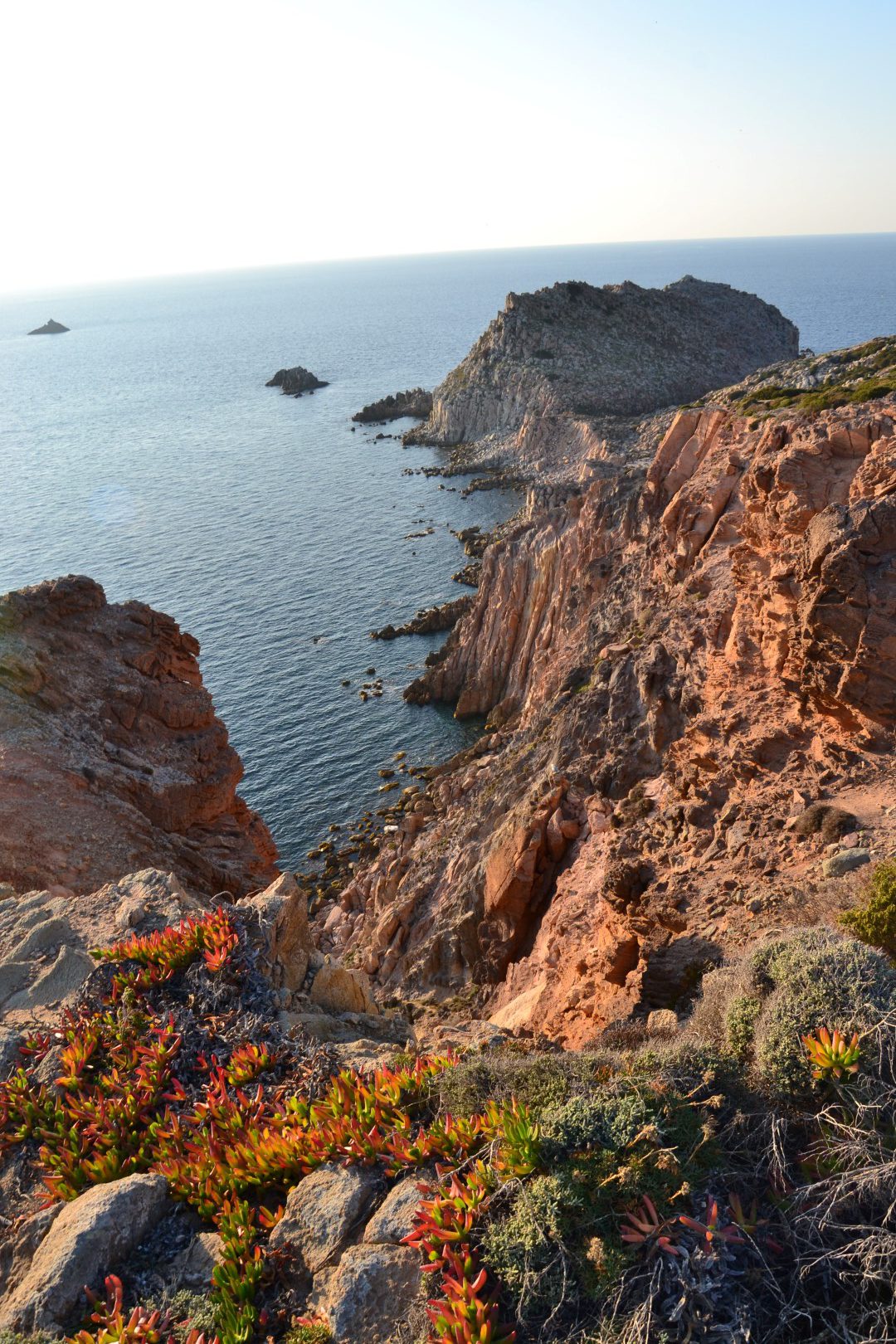 The island is beautiful, so the investment paid off. In the evening, we had a nice dinner in the restaurant Galaia, which we warmly recommend to anybody who visits this island. 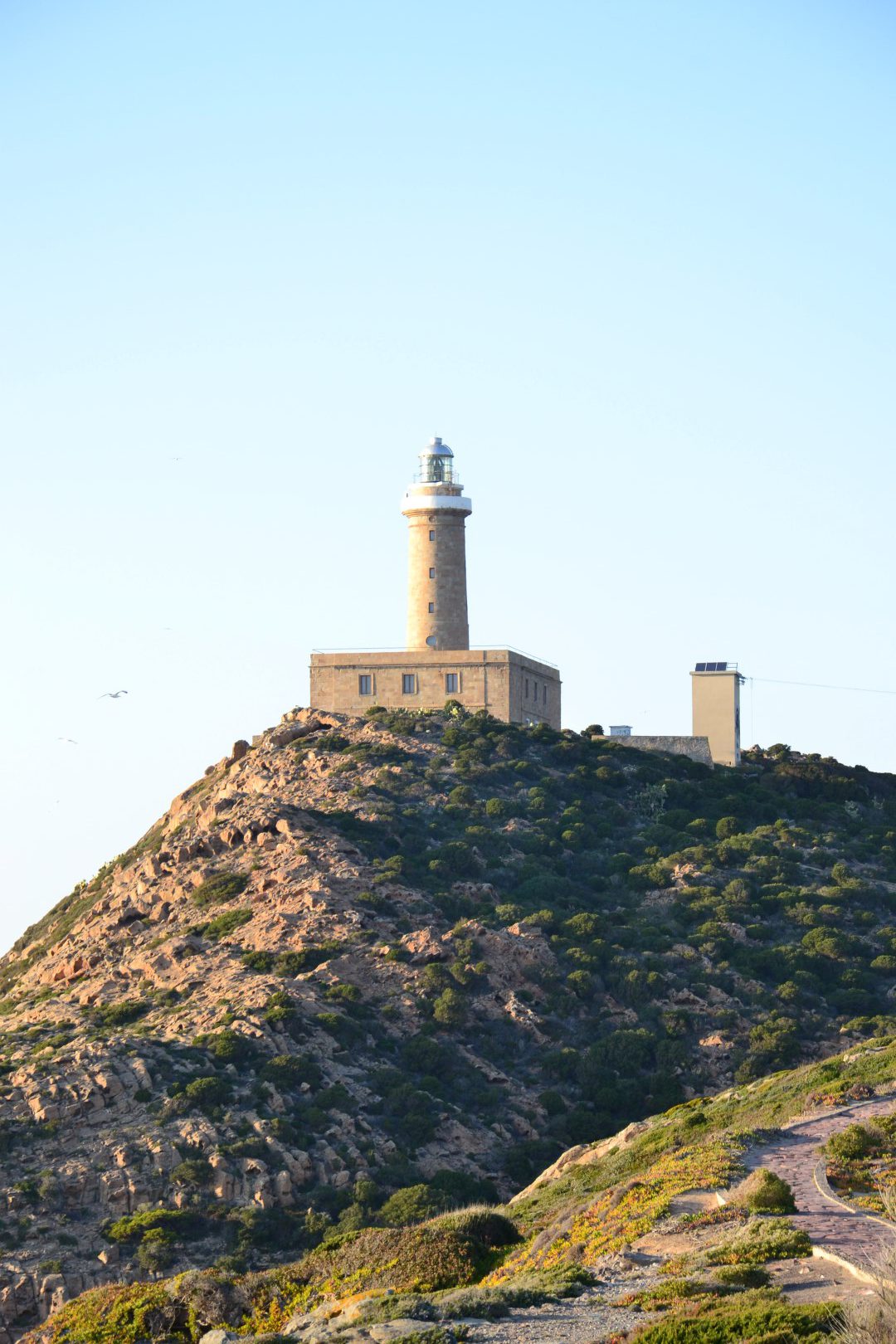 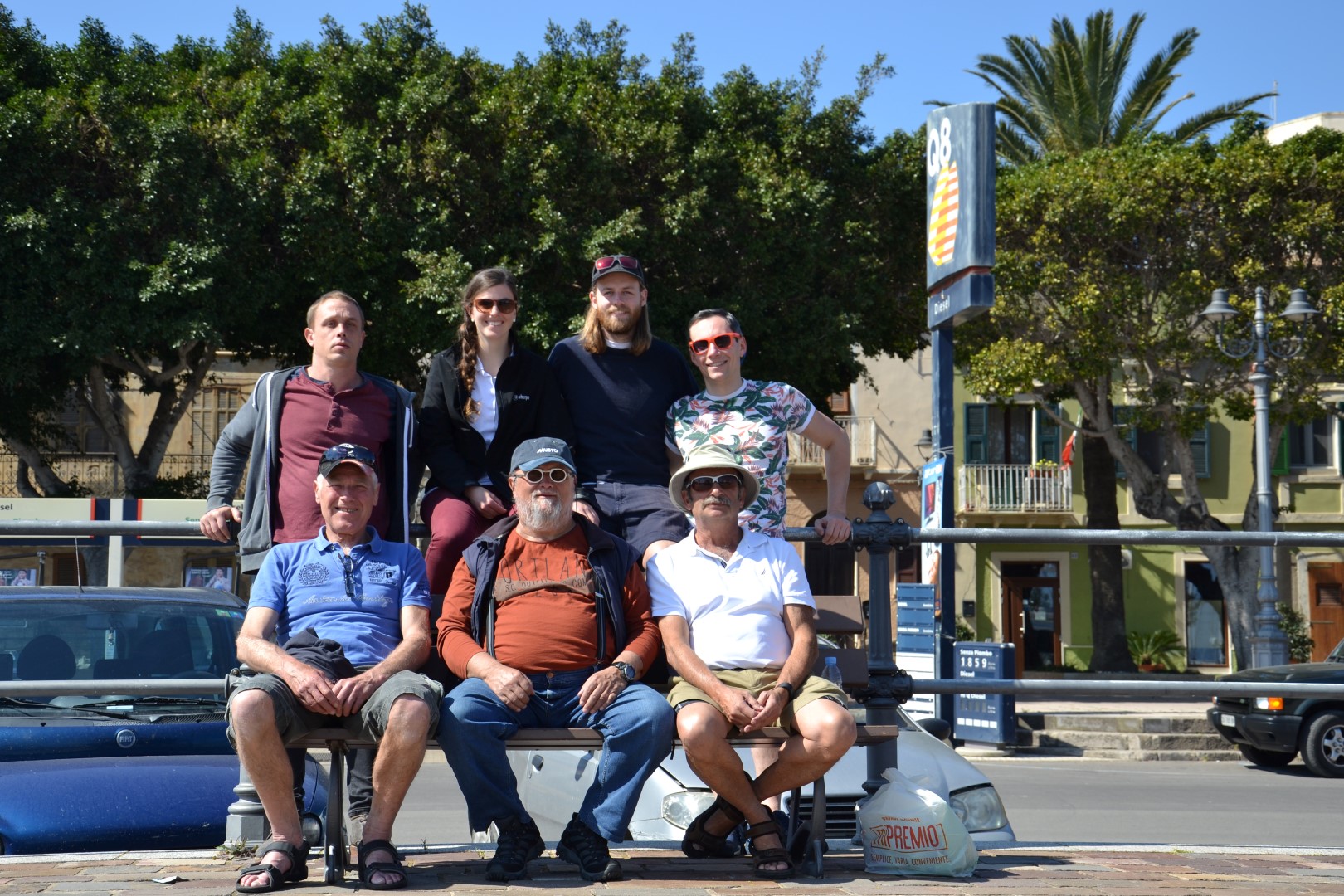 As agreed the previous day, we left Carloforte Harbor at 9 am, after buying some fresh bread. As soon as we put away the fenders and ropes, the crew had breakfast. Soon after, we set sails and stopped the engine. A good and steady westerly breeze developed. It was a perfect sailing day: cloudless sky, warm sun, nice wind. 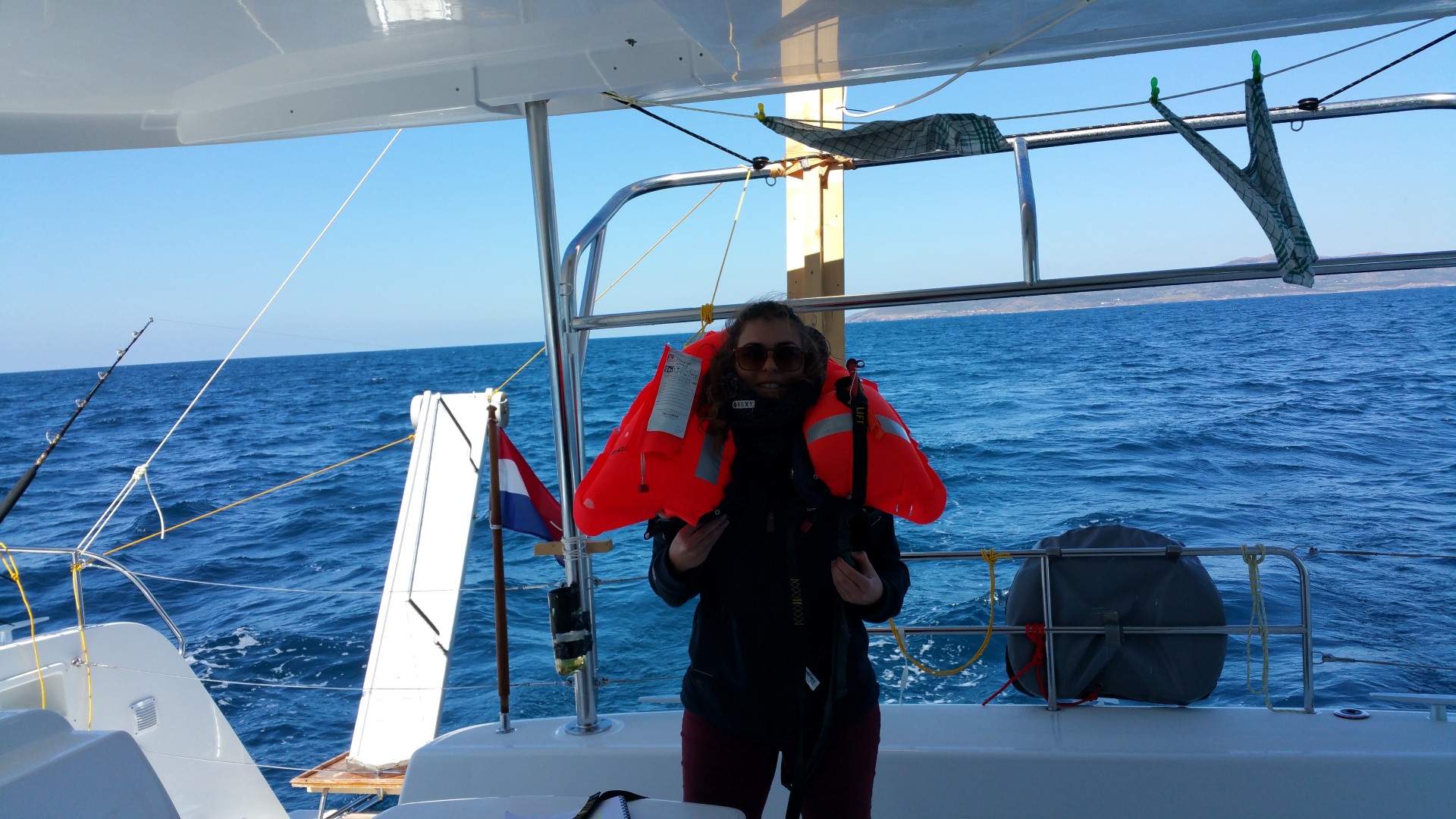 At 4.20 pm, the Guardia Finanza approached us. We put away the jib and slowed the boat. After a brief conversation via VHF on Channel 72 about the crew, our nationalities, the last and next port, they left. We jibed on the reach of our next destination. Sicily in general, but we could also make a stop on the islands of Ustica or Favignana. In the afternoon, we had couscous with spicy vegetables. Around 9.30 pm, the wind weakened, and we had to start the engine again.

Check out the sixth chapter of our story!