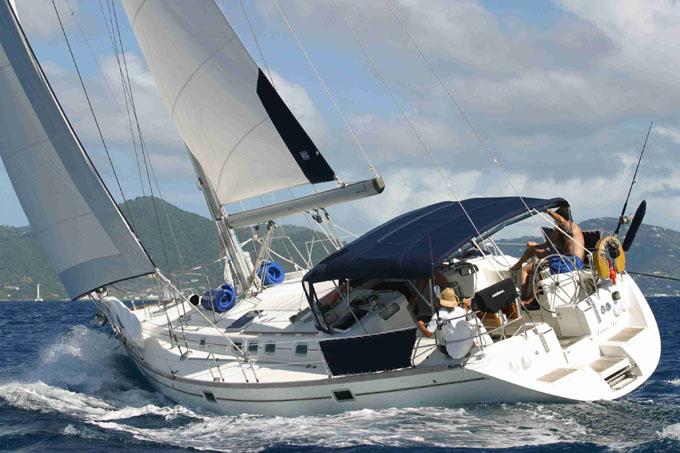 One of the most romantic summer postcards come from Greek islands for sure. Crystal clear waters, virgin bays and coves, golden sandy beaches, white facades of the houses on the cliffs above turquoise sea… Beautiful! All mentioned in addition to white sails and good company aboard could only make pure romance when it comes to sailing Greek waters. That beautiful dream could become a nightmare if some local wind characteristics are neglected. What is it about? Mediterranean and neighboring seas are very often influenced by some kind of annual or seasonal wind pattern, due to their position and configuration of surrounding continent. Sailing Greek waters is very much influenced by summer northerly winds called etesians or meltemi. The word etesians come from ancient Greek origin έτος (ètos), meaning annual, while more famous word meltemi has a Turkish origin. Ancient sailors have noticed that the same annual wind pattern takes place every summer. Constant summer northerlies are later concluded as a consequence of a pressure gradient between low pressure area over the Asian continent, influencing eastern Mediterranean; and high pressure area over the Azores, influencing western Mediterranean. However, meltemi is a summer seasonal wind blowing generally from northerly directions, changing the speed, direction and characteristic due to local topography. It generally blows from June and July, reaching its full strength by the end of July and in August; and slowly dying towards the end of September and the beginning of October. It usually starts to blow in the forenoon reaching its peak in the afternoon and dies with the sunset. The daily repetition of meltemi comes as a consequence of heating and cooling pattern of surrounding vast land areas and the sea. It comes with clear and sunny weather. However, meltemi comes without warning and its gusts may vary 4 to 7 or 8 Beaufort (!), so make sure your Greek sailing trip does not become too adventurous. According to the local weather lore a warning sign of meltemi would be a long white cigar-shaped cloud over the island, formed just before the wind arrives. The cloud would remain in place during the whole day, until the evening calm. This hint is particularly applicable in the Cyclades, but instead of staring at the skies above the islands it is always better to count on meltemi and keep your mind on weather forecast! Some sources claim that Turks adopted the name of this wind from ancient Italian mal tempo, meaning bad weather. Please do not be discouraged, but remember that meltemi can be either your friend or your worse nightmare… I wish you a calm sea, a fine wind and a strong mast!
Greece Meltemi wind