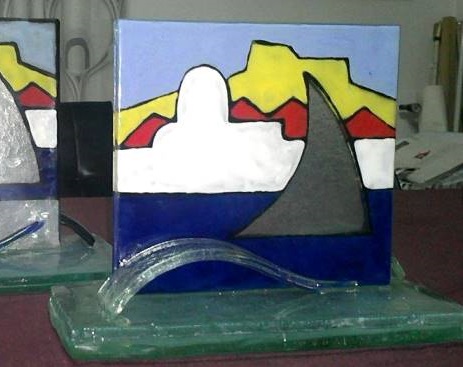 It is the end of the year, the time when we all summarize what we did and how it was in the last 12 months. That habit goes from the top governmental level, when we rate our dear politicians; through the results of firms where we work; to the personal level when we make decisions for the next year according the overall impression of the past year. Similar habits occur among people who sail the seas. Different naval associations all over the world reward prominent individuals and crews for their behavior at sea, according to the tenets of good seamanship. The juries for such rewards usually have a hard time deciding who deserved the prize because all of the nominees indubitably deserve the prize. In my country such reward is annually given by the Seafarer’s Union of Croatia which will soon declare the nominees and the winners. That’s a subject for some other post. What I want to share with you is one exceptional prize for good seamanship. This prize is given by a small but proud sailing club JK Val from Šibenik. These enthusiasts have established their version of good seamanship reward two years ago with very simple standards – their prize would be given to the individual or crew who contributed in search and rescue actions which involved sailboat or a crew of sailors. The time between two prize giving is the period between two st. Nicholas’ days, as this saint is the guardian of the seafarers. The first prize was won by the crew of the SAR ship of Šibenik Port Authorities which saved 11 sailors during a regatta which had to be cancelled due to bad weather conditions. The action involved several merchant navy ships who secured the area by providing a wavebreaker with their hulls. The action was even more dramatic because the famous Jabuka offshore regatta takes place during the night in early December. The second year’s winner was an 11 year old girl who jumped into the freezing cold sea during the optimist class competition held last winter. She was close to the leading competitor but she decided to leave the position and jump overboard in order to rescue her competitor whose optimist capsized while his legs got stuck into sheets. Thanks to the JK Val Sailing Club’s reward this event went publicly exposed so young Hana won the fair play prizes from Croatian Sailing Association, Croatian Olympic Committee, International Sailing Federation and International Olympic Committee. She is a true hero! This year’s award belongs to two fishermen who almost turned from saviors to victims. Two fishermen were fishing from their small fishing boat and noticed a sailing yacht with her crew panicking aboard. Everything seemed rather harmless because the weather was clear, wind speed was close to zero and it was still daylight/afternoon while the event took place not far from nether islands or the coast. The fishermen decided to leave fishing behind and help foreigners’ crew and give them a tow to the nearest harbor. It was already evening when fishermen started towing a 17 m long sailing yacht. Suddenly, the yacht started moving pretty fast which movement capsized the fishing boat while two fishermen fell overboard. Somehow they managed to catch the capsized boat and after minutes of struggle they managed to cut the towing lines. So they found themselves floating in the cold sea (it was September) in the middle of the night, being drifted towards the open sea. They were found 25 NM off the place where they spotted the unfortunate sailing yacht, after 17 hours spent on the wreck of their fishing boat. When they got their prize in December they stated that good seamanship is something they will never give up because we are all brothers at sea. P.S. Nobody knows what happened with the saved sailing yacht and I deliberately do not want to state the nationality of the saved crew. If they read this post may they know that their shame is forgiven but not forgotten. I wish you a calm sea, a fine wind and a strong mast!
Croatia sailing traditions Šibenik