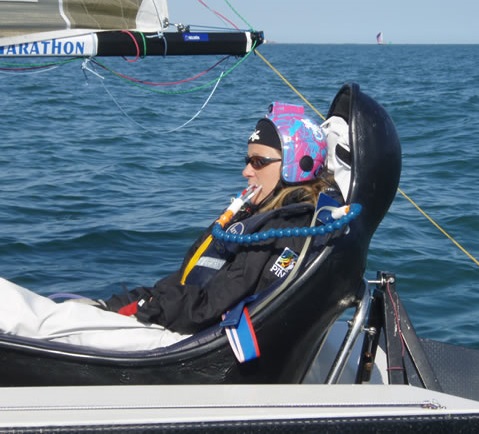 This is a story about Hilary Lister, a record breaking sailor from England, born in 1972. After her biochemistry studies at Jesus College, University of Oxford, she started her PhD studies at the University of Kent in 1996, but, instead of finishing her doctorate regularly, she was awarded an honorary doctorate by the university. A nice story, sure, but so far nothing extraordinary. This story, however, gets a completely new perspective when you learn that Hilary suffers from reflex sympathetic dystrophy. This means that Hilary’s legs lost their function during her studies, and she lost the feeling in her arms towards the end of her doctorate. In 2003, Hilary was introduced to sailing. I heard about her during this year’s edition of the Marine Equipment Trade Show (METS) in Amsterdam. The organizers of the event noticed that yachtsmen and sailors are getting older, while younger people are not getting attracted by leisure sailing in the extent that would secure the sustainability of the nautical sector. The global recession has discouraged the younger generations to purchase their own vessels, and sailing is still considered an elite sport reserved for the wealthy. The METS organizers concluded that it is necessary to change the image of the nautical sport and leisure by constant communication. They realized that sailing needs to be promoted as an affordable activity. That is why they invited Hilary Lister to tell the story of her life and bury the myth of sailing as an elite sport. Hilary sailed alone across the English Channel on 23 August 2005. It took her 6 hours and 13 minutes. She was the first sailor with quadriplegia to accomplish this achievement. Furthermore, she became the first female person with quadriplegia to sail solo around the Island of Wight. She managed this in 11 hours and 4 minutes on 24 July 2007. Bad weather and technical problems prevented her in an attempt to sail alone around Great Britain in 2008, but she tried again in 2009 - and succeeded. She said that sailing gave her life “a new meaning and purpose”, which I understand and appreciate completely. Her will to continue her life despite the obstacles, and finding herself in sailing sport truly deserve every respect. In addition, her work is dedicated to promoting sailing and raising awareness of disability. The example of Hilary Lister should be in our minds whenever we feel lazy and try to find excuses not to do something. Think about it when you say “it’s impossible” or “I can’t do that”. I wish you a calm sea, a fine wind and a strong mast!
sailing story