With more than 5,000 miles of coastline, Spain is definitely one of the most attractive Mediterranean countries. Whether you're looking for a perfect family beach holiday, quiet private sandy beach or just a „party“ beach, Spain offers you such variety so you can choose whatever you want to please your needs. Spain has more blue flag beaches than any other European country, which is the main reason we're bringing you a list of Top 10 beaches in Spain. 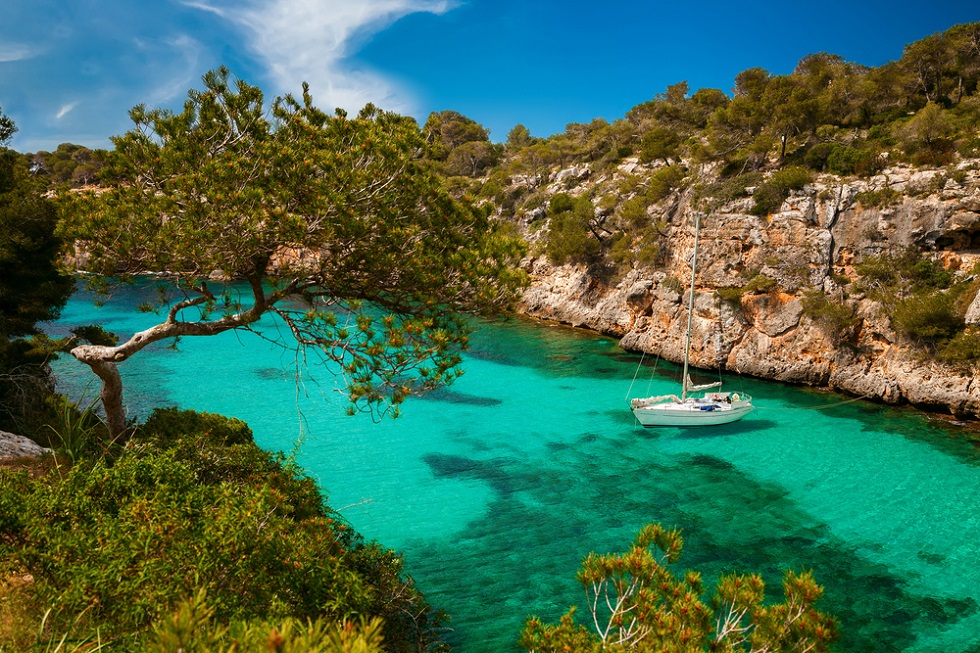 Cala Pi, Mallorca[/caption] Cala Pi is the perfect choice for those who are trying to relax and enjoy quite and peaceful beach. With it's golden sand glistening between two rocky cliffs, Cala Pi deserves to be on the list of Top 10 beaches in Spain. Name „Pi“ is from the pine trees that surround this beautiful beach perfect for families as well as single travellers. It is located in the south central coast of Mallorca and it is very popular destination among sailors who are enjoying swimming in the crystal clear waters. The anchorage in Cala Pi is protected from all but S winds and it is essential to anchor bow and stern.

If you're coming from the land, you will have to climb down 147 rock steps to get there. 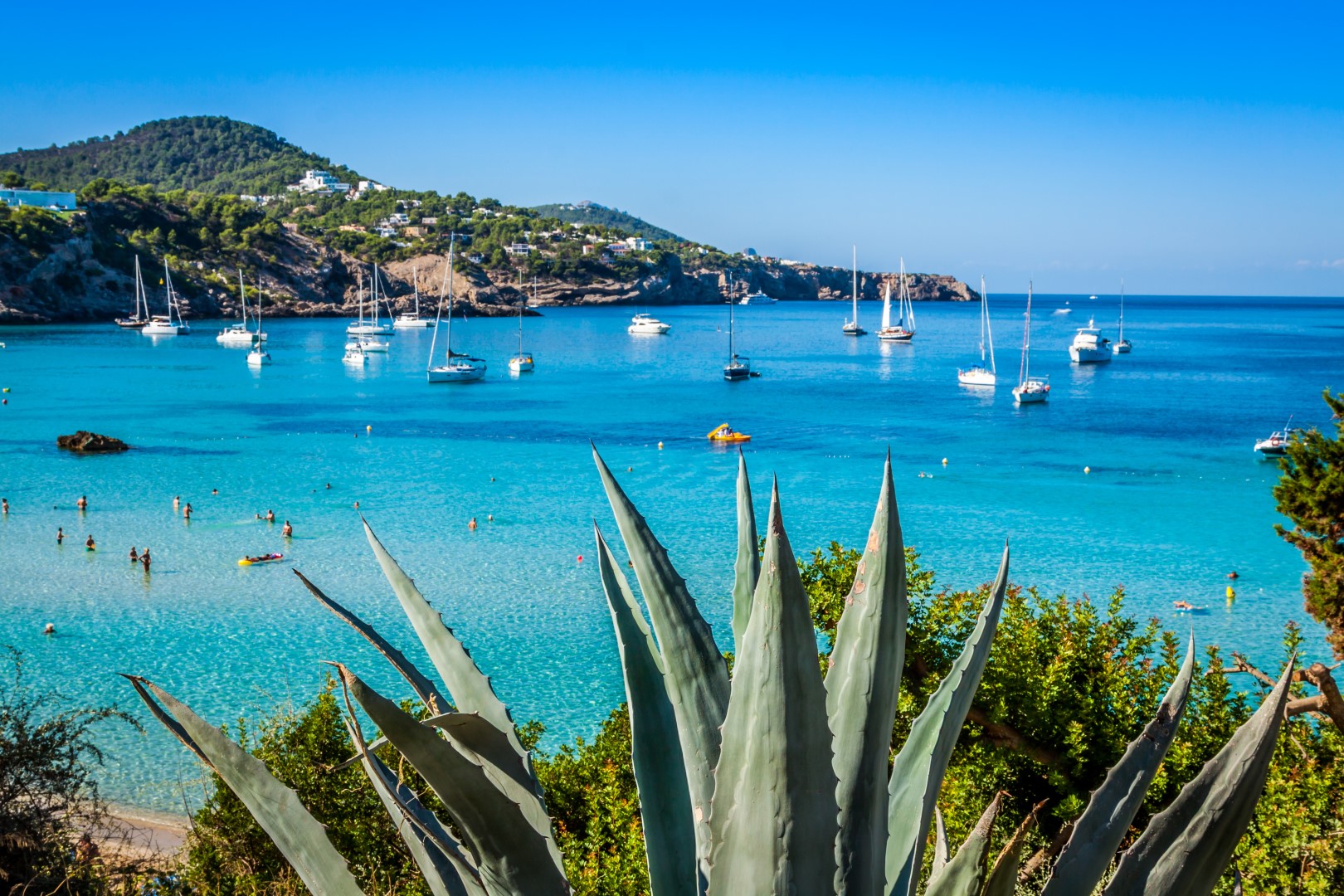 Cala Tarida, Ibiza[/caption] If you are into windsurfing, underwater diving, water skiing or sailing, Cala Tarida is right place for you.  It is the longest and widest beach of white sand on the west coast of the island. Even though it's on Ibiza, Cala Tarida is very peaceful and family friendly beach resort. It has beautiful clear turquoise and azure water, and it is very well known for one of the most amazing sunsets on the island.

In comparison to some other resorts, Cala Tarida doesn't have nightclubs, but there are still some bars and places to eat. 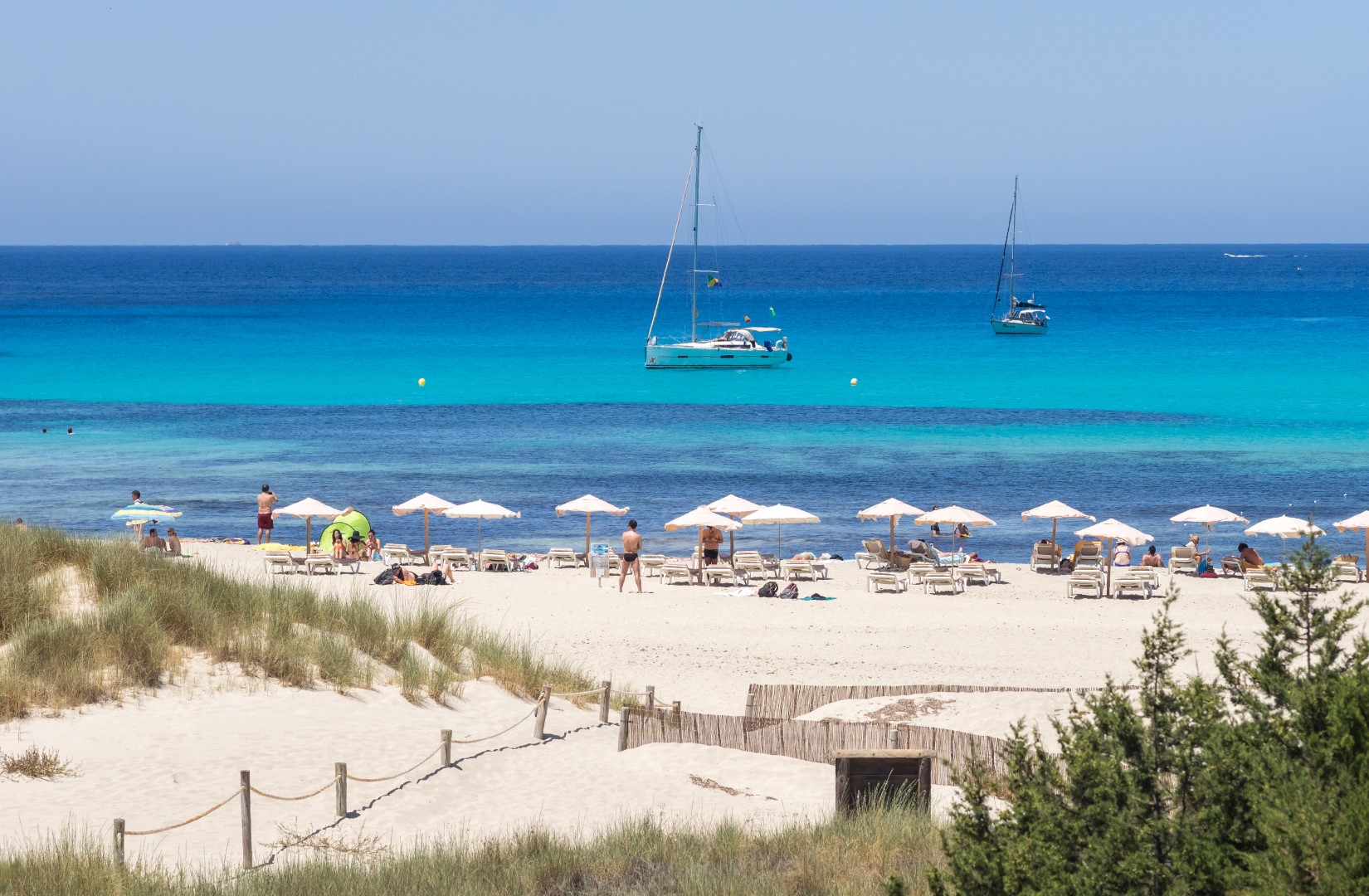 Cala Saona, Formentera[/caption] Cala Saona is one of those perfect beaches that you can actually capture with your phone or DSLR.  This beautiful beach is the best anchorage spot in whole Formentera. Sala Caona is very well known for its gorgeous sunset and the sun is setting after 9pm every night, which means that you can enjoy all your summer activities so much longer. Foundation for Environmental Education has awarded this beach with „Blue Flag“ mark. Cala Saona is not just a beach – it has a lot of surrounding farmland that will also literally take your breath away.

In sixteenth century, Cala Saona had 400 ships anchored at port which is nowadays very hard to imagine. 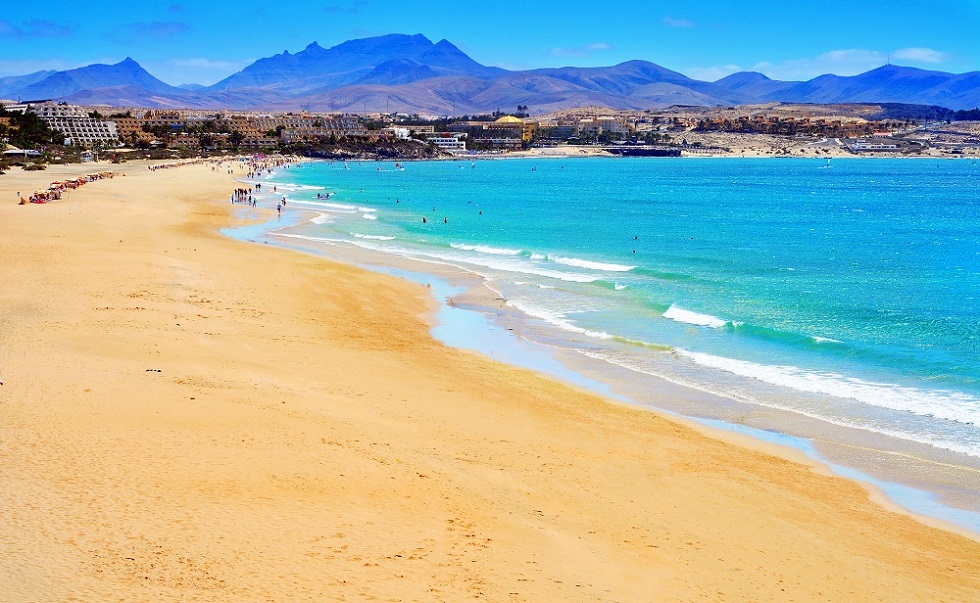 Playa Esmeralda, Fuerteventura[/caption] This small beach separates the beaches of  Costa Calma in the Sotavento beach, one of the most famous places for windsurfers. Playa Esmeralda is not so crowded, and it is relatively wind-protected beach. The waves are very gentle so you won't be able to resist experiencing the Atlantic in its most calm and tranquil way.

It is very interesting to mention that if the tide is high, you can not walk to the beach, so you will have to take the car. 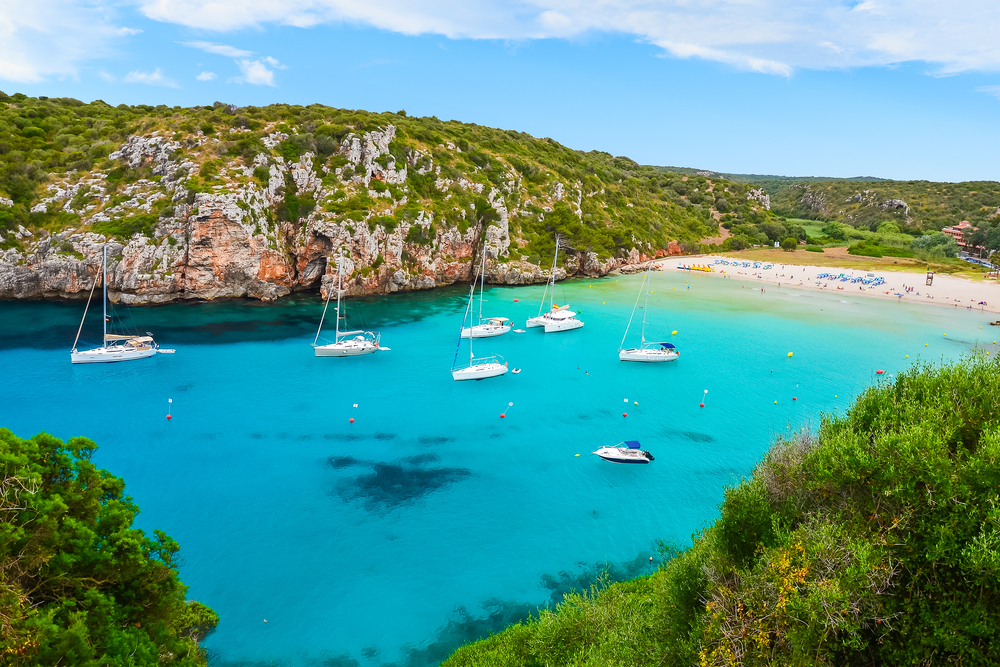 Cala en Porter beach, Menorca[/caption] The Cala en Porter beach is situated in a deep rocky bay in the south-east coast of Menorca, in one of the first residential areas of the island. It is covered with fine-grained sand and the water is very clear and shallow.  Anchoring is possible on a ground consisting of sand at a depth ranging from 7 to 3 meters. Whole bay is well protected against winds and waves. Cala en Porter is family and children oriented – their offer is especially adjusted for the small ones.

Along the cliffs that are surrounding the beach you can find Cova d'en Xoroi, a cave refurbished into a disco. 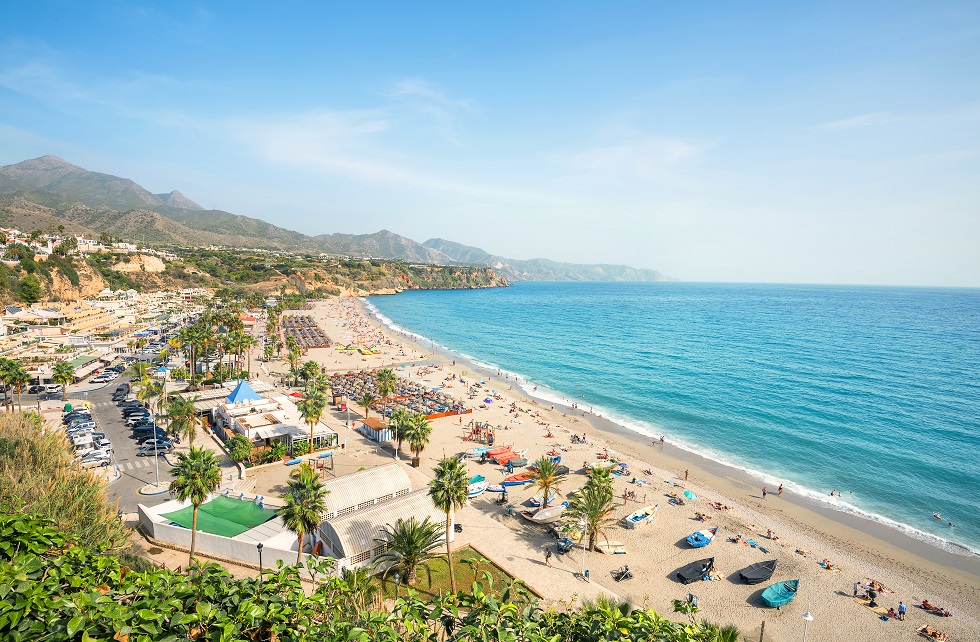 Burriana Beach, Nerja, Costa del Sol[/caption] Nerja is a popular Spanish resort town 50 kilometres east of Málaga. The coastal landscape of Nerja is a panorama of contrasts, from the long sandy beach that make up El Playazo to the more urban beaches. Burriana Beach is considered as the jewel in the crown of Nerja’s 12 beaches. With its golden sand, Burriana is very popular among tourists with children as well as those who are trying to have their holidays „active“.  Parasailing, diving, pedalos, volleyball, kayaks, you name it, they have it. That is one of the reason why Burriana deserves to be in the list of Top 10 beaches in Spain.

Burriana Beach is also well known for best chringuitos and the Paellas throughout whole city area. 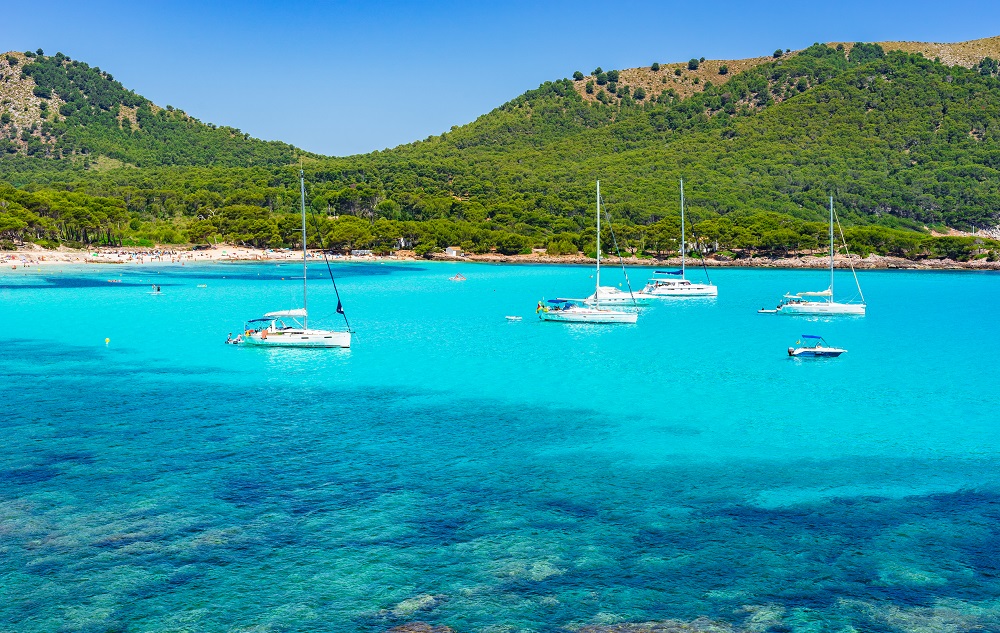 Cala Agulla, Mallorca[/caption] Another Blue Flag beach with golden sand that definitely deserves place in our list of Top 10 beaches in Spain is Cala Agulla. It is the largest beach in the eastern part of the island with clear and shallow sea. Cala Agulla is surrounded by beautiful landscapes and it offers something for everyone – from watersports and volleyball to different restaurants and beach bars. This part of the country has nearly a perfect climate with so many sunny days.

Cala Agulla is situated in a protected area so, as such, it remains unspoilt. 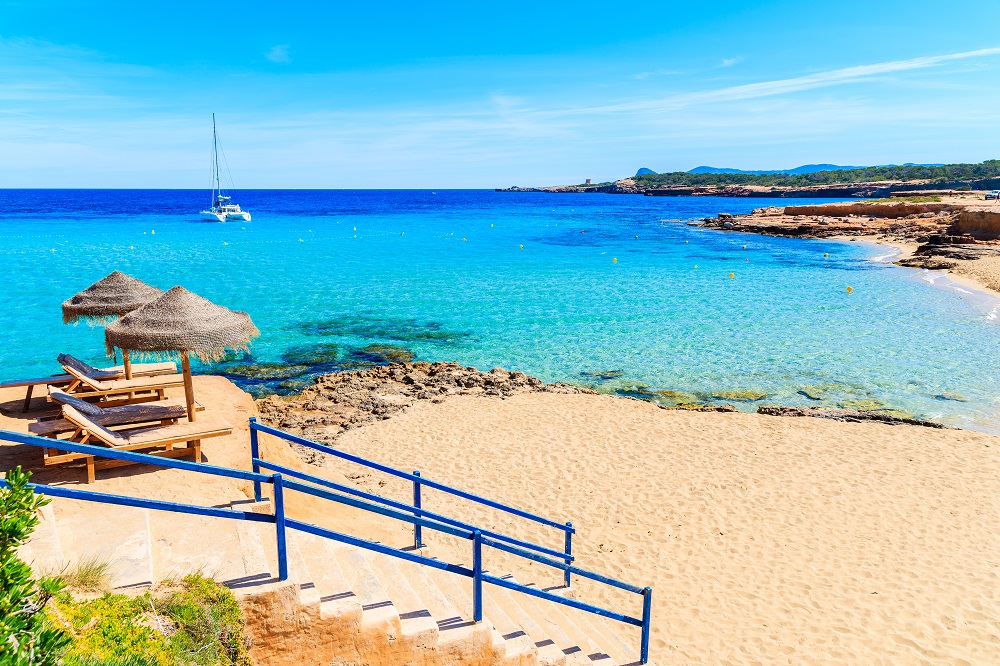 Cala Conta, Ibiza[/caption] Even though Ibiza has more than a few beautiful sandy beaches, many believe that Cala Conta is the best one. Sunsets from Cala Conta are so spectacular that some people come there just for that.  Due to its popularity, Conta is often crowded. If you want to avoid that stress, come there from the sea with your boat because there are no traffic jams and no need to worry about finding a parking spot. If you are a sailing enthusiast, this would be the best anchorage in Ibiza to watch the sunset. Cala Conta also has nudist part and family part of the beach.

It is possible to swim to the opposite big island at low tide. 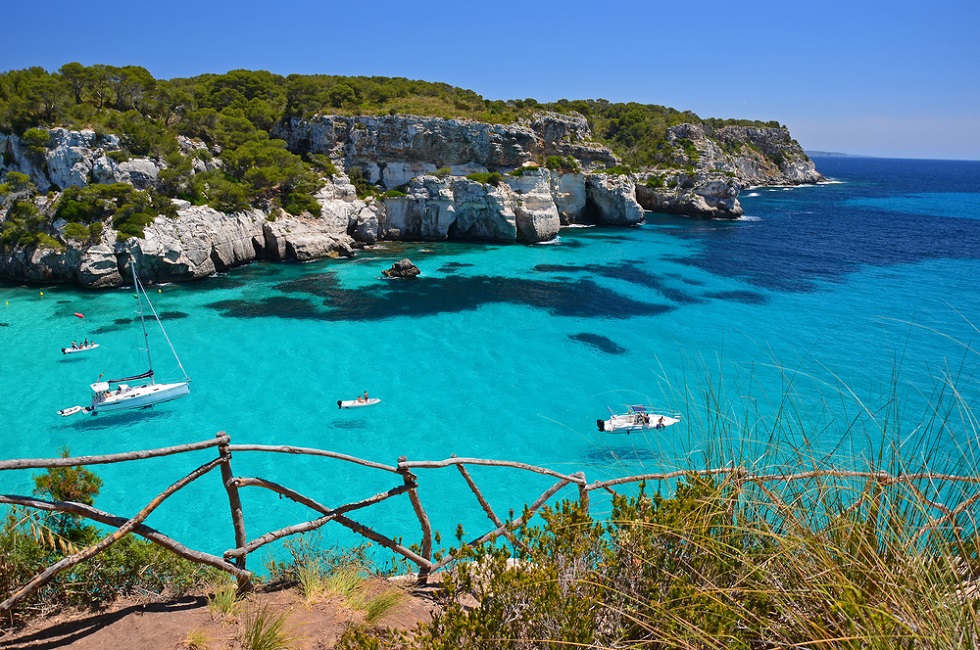 Cala Macarelleta, Menorca[/caption] Stunning shades of clear turquoise and blue water in the bay with beautiful white sandy beaches make Macarelleta one of those places that deserve to be on our list of Top 10 beaches in Spain. It is small beach flanked by high cliffs of pine trees. Macarelleta is a „wild“ beach with no facilities or lifeguards. Cala Macarelleta is perfect to arrive by boat, kayak or jet ski and it is very family oriented.

Cala Macarelleta is so small that it gets very crowdy after arrival of a few boats so if you want to catch your spot in this beautiful bay, you should come early morning. 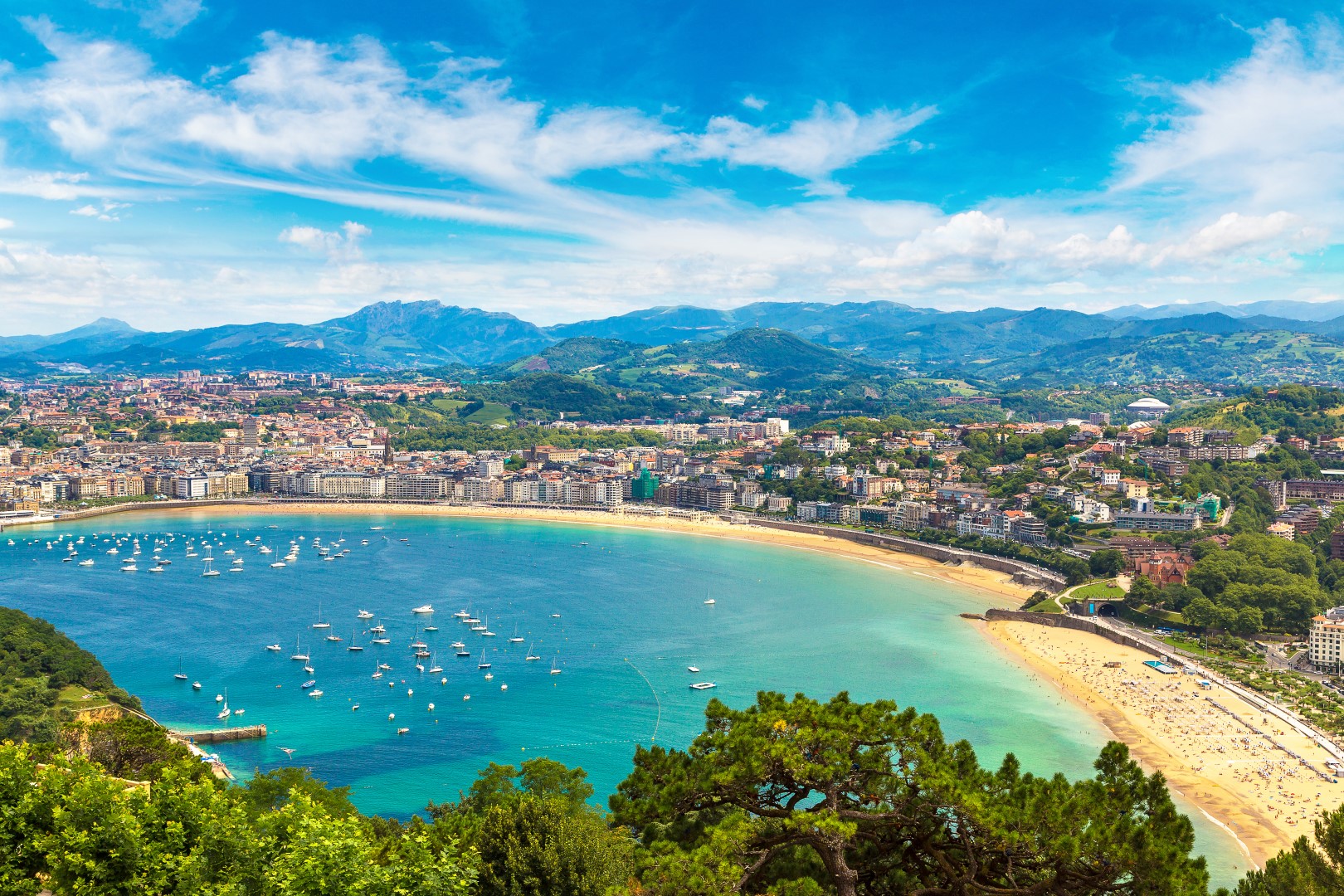 La Concha, San Sebastian[/caption] Our list of Top 10 beaches in Spain can't be complete without La Concha, without a doubt the most symbolic beach of the San Sebastian. Some people refered to it as the most beautiful city beach of Europe. La Concha is 1350 metres long so it is the best location for a long walk along the coastline. Since the beach is surrounded by mountains, it is very well protected against high waves and the wind. La Concha is a sandy beach in which the tide fluctuation affects greatly the area available for use.

In the 19th century, La Concha was the place where Queen Isabel II came for her bath therapy and that is the main reason why San Sebastian turned into the summer residence of the Spanish royal family.
baleari beaches canari Ibiza mallorca menorca sailing Spain