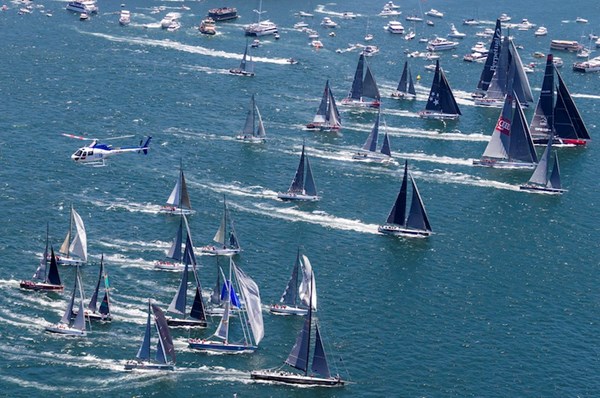 When I was a kid the most important thing in the world was to be the first in my neighborhood. It did not matter what at, but I had to be the first. I suppose just like every other kid in the world… To run faster than other kids, to climb the highest tree, to be impossible to find in ‘hide and seek’, to have the strongest father… there are so many categories, but to be the first used to be the meaning of life. As I grew older the categories changed but the principle remained the same – to be a champion. Of course, I had many competitors because every kid in the neighborhood wanted the same. And the everlasting battle continued throughout the years. I remembered these innocent childhood times the other day when I checked out the news from the sailing world. I found out that Esimit Europa 2, the unbeatable sailing yacht in almost all major sailing events worldwide has got a serious competitor. Just to remind you, Esimit Europa 2 is the name of former Alfa Romeo 2, the supermaxi racer originally owned by Kiwi millionaire Neville Crichton. Simčič managed to gather an international team of 16 carefully chosen athletes led by skipper Jochen Schuemann, the owner of three gold and two silver Olympic medals. Furthermore, the financial structure is blessed by support of European Commission and mighty oil corporation Gazprom.Under the name of Alfa Romeo 2 this 100 feet overall racer was the first to finish in at least 140 races including the Sydney to Hobart Race in 2009 and Transpac Race 2009 when she set the new elapsed-time record. After being purchased by Slovenian Igor Simčič she was renamed to Esimit Europa 2 and continued to reign the racecourses around the world. I do not have to mention that Esimit Europa 2 has won all major regattas while the victory in this year’s edition of Barcolana in Trieste, Italy was her 34th consecutive win. Her major competitor appeared in the shape of the Comanche. It is a brand new high-tech supermaxi owned by Texan billionaire Jim Clark, also known as the founder of Netscape. A 100 feet long racer built using the latest high technology inventions such as pre-impregnated composite fibers. The Comanche was launched on September 27th in Hodgon Yachts Shipyard in East Boothby, Maine; the oldest shipyard in USA. Her 46 m high mast supports massive sails among which only the spinnaker spreads over 1000 m²! Clark’s plan is to win all major regattas including breaking the offshore sailing records at Rolex Transatlantic, Rolex Fastnet, Rolex Middle Sea and Rolex Sydney Hobart Race over the next two years. The first step to achieve this ambitious plan is to win Rolex Sydney Hobart Race which has started its 70th anniversary edition these days. The Comanche’s skipper is Ken Read, six times world champion in J-24, who steered America’s Cup and Volvo Ocean Race boats twice so far. His tactician is Kiwi Kelvin Harrap who has three Volvo Ocean and America’s Cup races under his keel. Sounds good, doesn’t it? Although these projects’ budgets are worth as much as several hundreds of millions (US dollars or Euros, does it matter?), they still remind me of childhood battles where the only important thing was who will climb the highest tree in the neighborhood. I wish you a calm sea, a fine wind and a strong mast!
race regatta