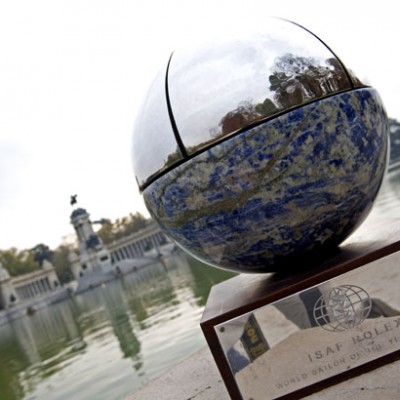 The ISAF Rolex World Sailor of the Year award could be described as the Oscar or the Nobel Prize in the sailing sport. It is the highest reward a sailor could dream of and win for their outstanding achievements. This year’s winners are announced in Palma de Mallorca on the annual ISAF conference held in November of the last year.

They are Martine Grael and Kahena Kunze from Brazil in female competition while male sailor of the year is Aussie James Spithill. Martine and Kahena earned their title for winning the world championship in 49R class held this year in Santander, Spain. In addition, they deserved it for holding the leading position on the top list for the entire season!

Their success isn’t a surprise if we take into consideration the fact that these girls have been sailing together since the optimist class. Their first world recognition took place in 2009 when they won the title in 420 class. To confirm that the apple doesn’t fall far from the tree I would just say that Martine is the daughter of Torben Grael, multiple Olympic medalist and Volvo Ocean Race winner, bearing nickname ‘the Turbine’ for his fame in conducting sailboats.

On the other hand, I should not spend too many words to present James Spithill… Among other, he is responsible for one of the greatest comebacks in sporting history. On the brink of defeat at the 34th America’s Cup in San Francisco, USA James Spithill led his team to victory in the nerve breaking finals. ORACLE TEAM USA trailed Emirates Team New Zealand 8-1 in the first to nine quest for the Auld Mug. Spithill managed to win the next eight consecutive races and ruin the dreams of Emirates Team New Zealand about ‘bringing the Mug back home’.

Prior to this epic victory Jimmy made his first tacks at the age of three while he took his first win at the age of ten along with his sister Katie. Later on he found his place in the world of match racing where he won multiple Australian and world titles.

Dinghy Sailing – what you need to know?