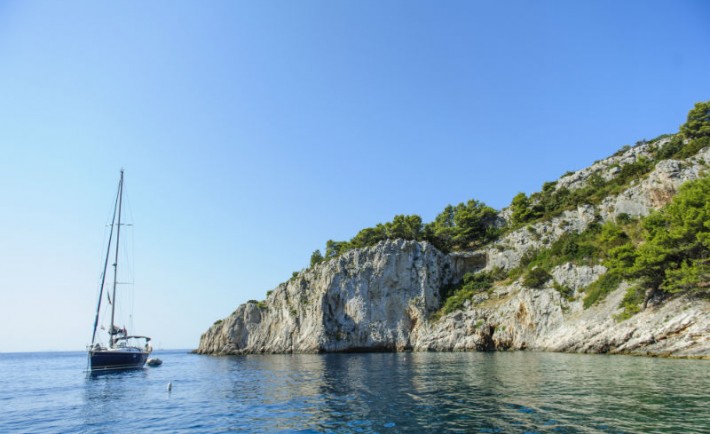 On the west coast of Šolta, the landscape does not look very hospitable to yachts due to its rocky slopes that steeply plunge into the sea. However, there are some exceptions where nature has made sure it is possible to take a break from an exhausting day of sailing. One of these places is Jorja bay, situated approximately in the middle of Šolta’s west-southwest coast. The neighboring Tatinja bay is bigger and easier to spot, so steer your yacht to starboard when you see it. The bay next to it is Jorja. At first sight, it does not seem like anyone would want to go into Jorja because it does not look sheltered at all. Instead, it seems deserted and inhospitable with its steep rocks all over the place. It looks more like a canyon that a typical Dalmatian bay. Nevertheless, this bay has something to offer. First of all, the ancient limekiln has been standing there for ages, although only its remains are visible nowadays. Secondly, there is an old fishermen’s shelter above the small beach at the foot of the bay. It took many years and a lot of sweat to build it, but this small establishment has protected many fishermen from worrying about bad weather. Today, this building has been refurbished and put into service to give shelter to contemporary fishermen – those who catch fish on the table. A young local enthusiast has decided to give this place a new life and has not spared any efforts or sweat to give birth to his idea. Young Kike, in spite of many obstacles, has managed to employ all his knowledge and determination and has established a family-run tavern. Since it is very difficult to reach this place by car, Kike’s tavern is reserved for yachtsmen only. As the cherry on top, Kike has set up a system of mooring lines up and down Jorja bay to make this place more suitable for accommodating up to eight yachts at a time, which corresponds to the capacity of the kitchen. If you are not in the mood to go to dinner with your tender, Kike will organize the transport for you with a smile. In terms of safety, Jorja bay is well-sheltered form northerly, easterly and westerly winds, while a visit to Jorja is not recommended during the reign of the winds from the south. The menu at Kike’s is quite simple. The landscape and hospitality are tasteful enough so one does not need to read the menu for hours. I can only say that I have never tasted anything else but his brudet (or brodet, brujet), which the Italians would call brodetto and the Frenchmen bouillabaisse. A less poetic explanation would define brudet as seafood stew, a very simple local specialty that varies a lot depending on its creator. According to many experts, Kike’s brudet is probably the best in the Adriatic! I wish you a calm sea, a fine wind and a strong mast!
Adriatic Sea Croatia Croatian islands Dalmatia Šolta Split