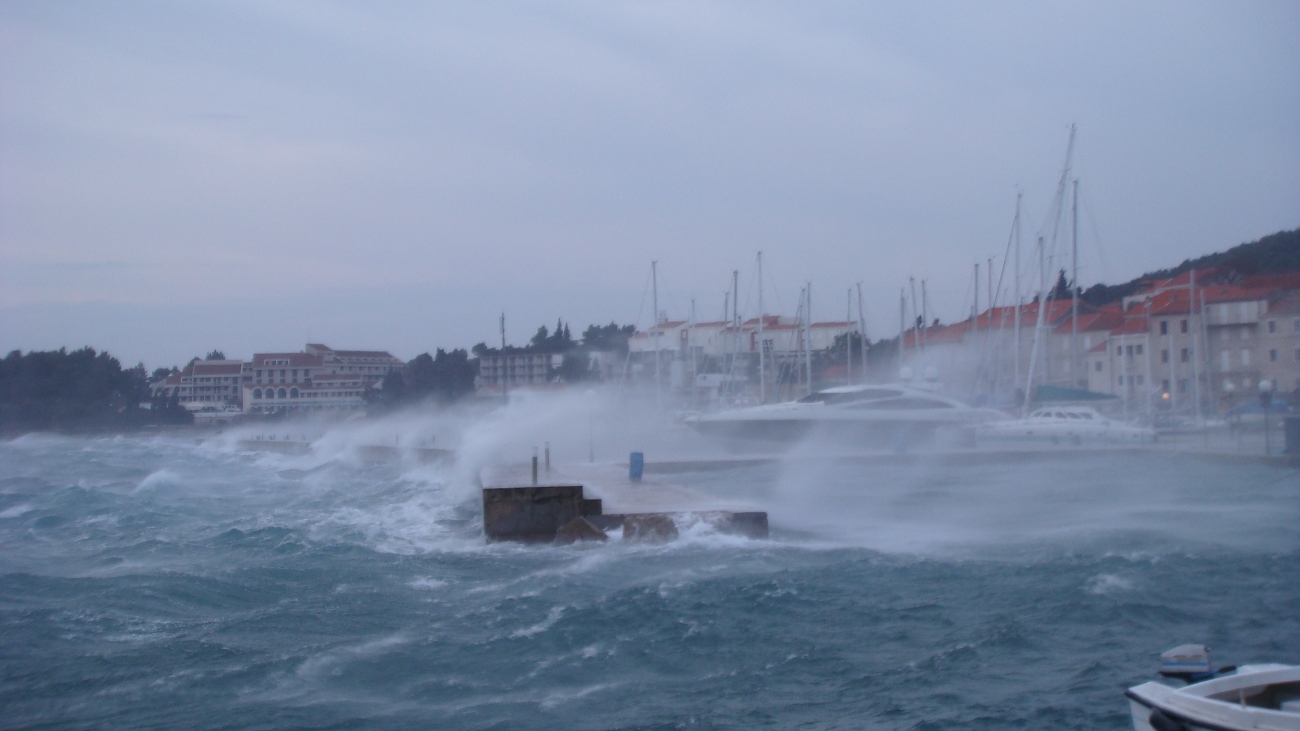 Unfortunately not everything is romantic about sailing in the Croatian Adriatic. One of the few things that make sailors’ lives difficult in these areas is bura. It is a strong and very unpleasant wind blowing from the coast in gusts which speed reaches hurricane strength. Bura is also called the phenomenon of East Adriatic for reason. It could either be friendly and adored if it is mild; or horrid if it's strong. The first mention of bura comes from the ancient Greek sailors who described it as warmly clad old man blowing the open shell, the symbol of roaring. Byzantine historic Procopius, who wrote the history of the war against Gothic tribes in 6th century (De bello Gothico), noticed that bura could be strong enough to lift a horse along with its fully armored rider. In recent history, bura had been explored by many international meteorological teams which found out a dozen causes for this interesting wind. However, I am going to mention the most typical characteristics of bura and leave the details to the scientists. First of all, bura is a cold and dry wind blowing generally from NE, changing its direction in line with characteristics of the landscape. It blows away clouds and brings clear weather. It blows in unpredictable gusts, changing its intensity with no time pattern. It comes as the result of congestation of cold air in the mainland, at the opposite side of the mountains which are spread alongside Croatian Adriatic coast. When cold air reaches its critical saturation, it climbs over the summit of mountain chain and precipitates towards the sea. The gusts of bura are the strongest at the beginning, and could last up to three or more days, easily slowing down. During the wintertime, bura could be particularly strong and dangerous, blowing off rooftops, rolling over cars, closing highways and tunnels. Gusts of bura in the wintertime usually exceed 20 m/s, occasionally 50 m/s which could be compared to grade 9 according to the Beaufort scale. The strongest gust was measured in 2003, amounting to 304 km/h. Apart of its unpredictable and strong gusts, the danger of bura for the sailors comes as very thick and dangerous sea-spray which could even kill a good swimmer in case of man overboard situation; not to mention damaging the sails and rolling over inexperienced or overly confident sailors… And that's more or less the cyclonal bura… Especially unpleasant bura would be its anticyclone variant. Along with all the above mentioned characteristics this type of bura brings along heavy rains and/or snow. It is also known as škura bura – the dark bura; from Italian scuro (dark). That’s why bura in Croatian language is of feminine gender and is mostly associated with an angry wife, unlike the Greek image of an old man. The old folk wisdom says: "Beware of škura bura, a woman with a beard and a man without body hair!" Old folks probably had their reasons for such a proverb. I wish you a calm sea, a fine wind and a strong mast!