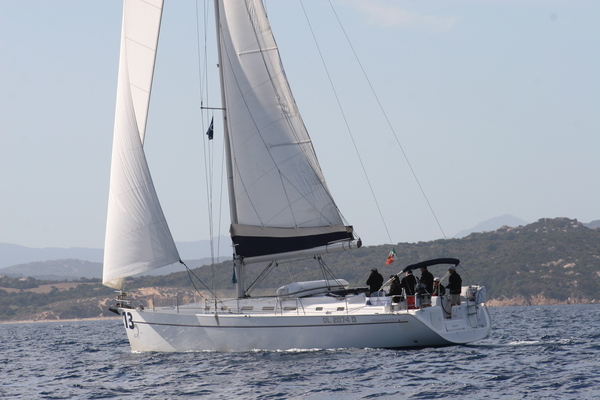 Is it possible to sail Cyclades without visiting Greece? It absolutely is! Of course, if we're talking about the Beneteau Cyclades sailing yacht. It is a concept developed years ago in order to provide ultimate spacious sailing yacht, mainly meant for chartering. They considered building at a lower price because the competition did not hesitate to criticize the French shipyard. However, the concept was fully accepted by leading charter companies while customers got exactly what they wanted – plenty of space for not too high a price. Beneteau Cyclades 50.5, as the biggest in the range, is especially appreciated among family boaters. It can accommodate up to 12 souls in 5 cabins and have extra sleeping space due to a folding saloon table. Spacious galley is usually equipped with two refrigerators or with one cooling box and a freezer while the saloon abounds with large storage spaces. Extra easy reachable storage space is provided below beds both in the bow and aft while cockpit booths also could be used for extra luggage. Beneteau Cyclades 50.5 most commonly comes as a version with 3 showers and toilets along with a deck shower. Since this yacht is 15.6 m long overall and is 4.89 m wide it is not made for high sailing performances and top speeds for competitive sailing. This yacht is designed to accommodate a lot of people and to provide them as much comfort and space as possible. Beneteau Cyclades 50.5 is powered by 75 or 100 HP engine and some 110 m2 of the total sailing area. Although Cyclades concept was criticized at the beginning by the competition due to its cheap building price, it proved the reputation of Beneteau shipyard as one of the most reliable yacht builder. If well maintained a Cyclades yacht can serve for years in charter fleet putting a smile both on the faces of customers and owners. Feel free to check it out in SailingEurope Charter base in Croatia, in Rogač on island Šolta. Not only will you experience all the benefits of Cyclades concept but also the benefits of chartering on an island! I wish you a calm sea, a fine wind and a strong mast!
Beneteau sailing yacht review