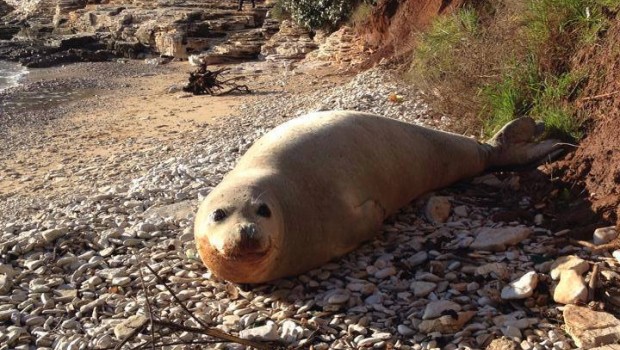 Mediterranean monk seal is an endemic species of pinnipeds within the seals family and probably the most endangered mammal in the world. Throughout the history Mediterranean fishermen truly hated this amazing animal because it caused multiple troubles when fishing and damages to their nets. It was severely persecuted and killed while in some cases fishermen guilds organized battues on them. On the other hand, its native name in Croatian Adriatic, if literally translated would mean the marine human, sea monk or simply Adriana; due to its similarities with humans. The life of the monk seal is pretty secretive because it used to mate and give birth at very secret and remote places such as underwater caves or inaccessible beaches. The hatred of the fishermen nearly brought them to extinction in recent years. Luckily, the regulations of the most of the Mediterranean countries strictly ban their hunt and try to protect their habitats. Estimated number of survived ones is between 500 and 600 living in two groups. One is located in NE Mediterranean, in the waters of Greece, Turkey and Cyprus while the other group lives in the waters of NE Atlantic, close to the shores of Cap Blanc, Mauritania and Desertas archipelago within Madeira Islands. Mediterranean monk seal is considered to be extinct in Croatia since 1960’s when the last specimens were caught. Since then it was only sporadically noticed but there are no data on its habitats or mating. However, the monk seal was spotted several years ago in waters of north Adriatic, nearby Cape Kamenjak on south side of Istria peninsula. Furthermore, it was seen and filmed having a nap and sunbathing on a beach in city of Pula, also in Istria. That gives us the hope that Adriana is back! In case that you spot or meet a monk seal while sailing in Croatia, please do not get close trying to catch a winning photo for holiday photo contest; but immediately contact the nearest maritime affairs entity or the Blue World Institute of Marine Research and Conservation and describe your encounter along with the geographic position. I wish you a calm sea, a fine wind and a strong mast!
Adriatic Sea ecology marine animals

How To Make A Paper Boat