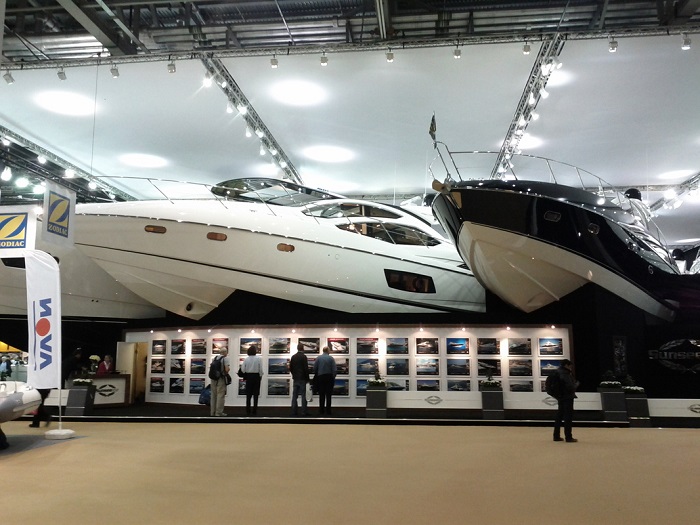 The title may imply that I am about to write about city decoration contest for Christmas and New Year’s Eve in which London won the first prize. Not quite true. Looking through the eyes of a sailing lover, London looks very beautiful in January because it is the time when London Boat Show takes place.

What Santa brought to us in terms of boats and yachts, water sports, nautical tourism and many more related to the sea and water could be seen and experienced between January 9th and 18th in the city on the banks of the river Thames. The impressive exhibitor list includes some 450 leading names from Sunseeker and Princess, through Fairline and Williams Performance Tenders to Beneteau and Jeanneau, just to name some.

One might say that London Boat Show, officially named CWM FX London Boat Show 2015, is the place where big guys are showing their muscles. That might be right and that’s classic. One of the specifics of this edition would be the Control the rain hall. It is located in very front of the Show and it is a place where you will be able to interact with the weather. Literally, you will be given the chance to run through the rain curtain as super sensitive sensors would make the rain cease as you run through it.

Once you've entered the hall you will experience sights, sounds and characters of boating life in massive screen gallery where all updates and most interesting films about recent Volvo Ocean Race will be interactively displayed. The 4D Experience hall is there to challenge your senses as you walk through a number of nautical locations.

A simple walk through this hall equipped with massive screens and sound system would give you the sensation of sailing through the heats of tropics or struggling through cold icy blow of the Arctic with the view of Polar Night lights. This part of the Show might be borrowed from some sci-fi exhibition.

Additionally, the entire project will be displayed and explained in detail while the BAR’s foiling Nacra used in training along with new Scorpion support chase boat could be seen along with 400 other boats shown within the Show.What attracts my attention the most is a true sailing stand where Sir Ben Ainslie presents his project for 35th America’s Cup campaign. Ben Ainslie Racing as the British Challenger will give visitors the opportunity to talk to Ben Ainslie himself as well as with his team members.

Lovers of innovation and technique would find the latest wonders within the Datatag Log where the Met Office, Raymarine, Landau UK, Southampton Solent University and others will show what they have. For all those who think about purchasing a vessel and have headaches of thousand doubts about it; or already possess one and want to move to another one – there is the Owners Associations Area. This is where you will find the answers to all your questions about choosing the right vessel just for you as well as the chance to have a chat with the more experienced fellows.

This and many more is brought to you by Santa just after you clean your place after New Year’s party. See you in London; it’s where the party continues…