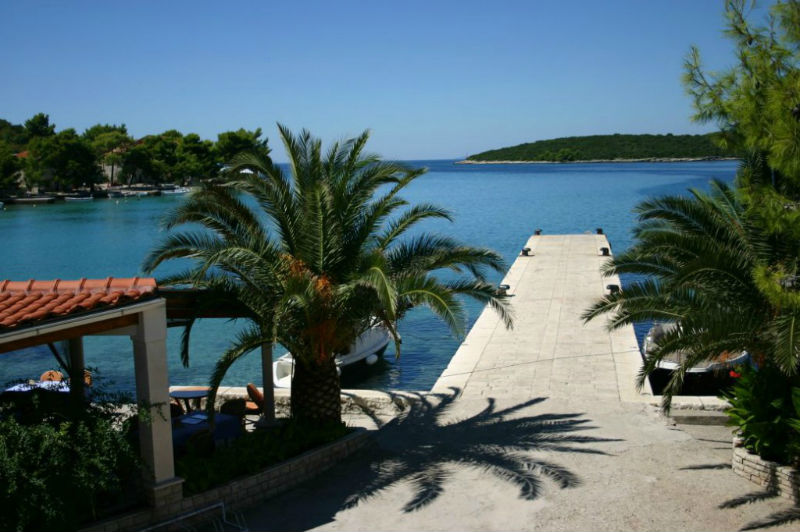 I have sailed towards Pelješac peninsula mostly taking NW to SE route so I consider Lovište to be the gate of Pelješac peninsula. It is located at the NW cape of Pelješac, in the bottom of a beautiful bay. Lovište is a small village with literally few houses and not many inhabitants. I found it very convenient both for a swim break and an overnight stay because it is well protected from annoying southerlies, northerlies and easterlies in this region. Swimming is recommended in Pržina bay, south off Lovište. The anchor of your charter yacht holds very well at the sandy bottom while not many people visit this bay making it calm and relaxing. It turned out as a perfect stop-by destination on the way from Hvar to Korčula. If you decide to stay overnight it would be recommended to sail in Lovište, or Luka bay as it is called in several nautical maps. The entire bay provides a safe anchorage while northern arm seems to be better protected. However, there is a pier in the middle of the bay (towards E) where fishermen’s boats moor from time to time. This is where fishermen from Korčula wait for good weather when fishing in the canal between Pelješac and Korčula. Konoba (tavern) Barsa found its place just on the foot of this pier and is the real reason why I'm writing this post. It is a small family restaurant providing stunning seafood specialties. Although there is a menu on every table, this establishment has its own rules. First of all, Konoba Barsa is open seasonally, from mid-May to mid-October while working hours are only afternoon and evening, not later than midnight. They don't serve just coffee because all seats are there for people who are willing to order food. Seafood mentioned in the menu is there just for orientation purposes because every guest is treated individually and with special care by the owner, mr. Gordan. His gastronomic philosophy is based on the belief that starters and first courses are the most important parts of the meal because that is what instantly makes you happy. So, mr. Gordan will welcome you personally and offer you what he thinks would be the best for you. He usually says “let me take your souls into my hands and guide you this evening…” He never fails, believe me. When he decides what to cook for you he lets you in the hands of his children who will take care of your drinks, which are usually finest Pelješac’s and Korčula’s wines such as dingač, postup, pošip or rukatac. While waiting for delicious dinner one can enjoy the spectacular sunset in the shades of his terrace – which is called barsa in the local dialect. That’s where the name of this konoba comes from. As soon as the pleasant atmosphere, which was mr. Gordan's first goal, is achieved it is time to start enjoying the dinner. I specially remember the series of cold and warm starters which included several types of marinated fish, octopus salad, fresh oysters, then black, red and white risotto. Yes, you are right, many restaurants in Croatian Adriatic provide similar menu… It’s true, but the whole environment, the mood of the owner and some secret recipes make these dishes really exceptional. The intro to the grand finale was lobster buzzara with homemade pasta… People I was at Barsa with were so amazed by this dish that they wanted to cancel the main course – grilled endemic mullet as the house special... White wine of the house was an excellent choice for that afternoon which turned into a pleasant night after a breathtaking sunset. It was not very difficult to find our way home because our catamaran was waiting for us safely tied to one of several buoys owned by mr. Gordan, free of charge for his customers. At first, my customers were a little bit skeptic about staying in Lovište because this tiny village did not look ‘spectacular’ and ‘fancy’ enough to them when we first approached it; but after dinner at Barsa they never doubted my recommendations… I wish you a calm sea, a fine wind and a strong mast!
Adriatic Sea Croatia Dalmatia eating out Pelješac restaurant review