While the majority of the population was sobering up and doing the expedition from the bed to the dining table, I spent New Year’s afternoon typing messages and tracking weather forecasts. The result of messaging was a sudden decision to start the car, collect a few of my friends and head towards the Croatian coast, namely Biograd town. The case was very simple – we got invited to sail.

Instead of organizing the reprise of the drunken New Year’s party, our friends from the Yacht Club Biograd decided to organize the very first regatta in 2016. The forecast predicted some 20 knots of severe southeast wind, but my team concluded that it would be bearable because it was a “before the lunch” kind of regatta. So, on the night of January 1st, our little team started its way to the sea. It was so funny to see other cars with skiing gear on their roofs, because there was no sign of snow in the entire Europe. 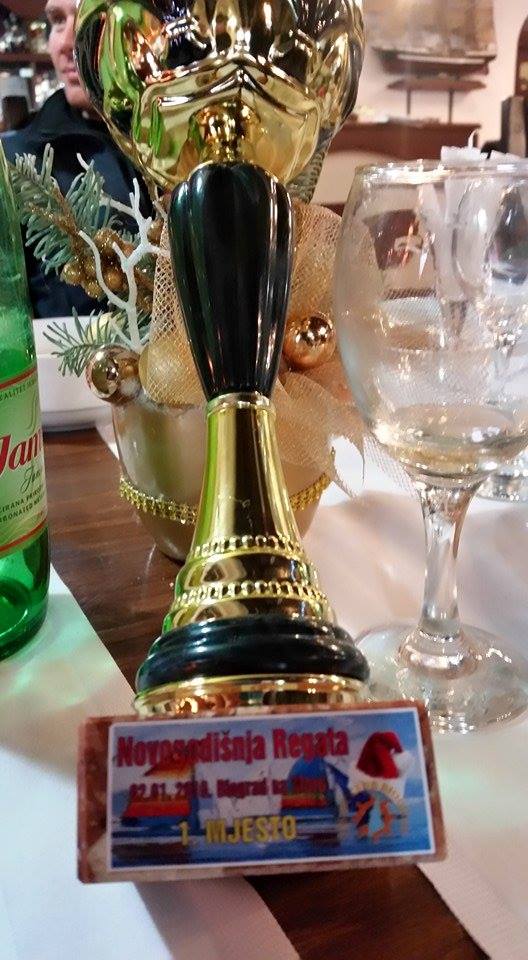 However, the next morning showed its cloudy face after 35 straight days of clear weather in Dalmatia. This meant that only four boats arrived to the start of the regatta. Luckily, all of them were of the same size and category (Elan 340), so all the conditions for monotype competition were fulfilled.

Some could say that it is not interesting to compete in such a small regatta, but I believe that a good race is not measured by the number of contestants, but rather with the willingness and enthusiasm to race. I will not mention that our team won the race, because the result was not our primary motivation for the race. This time, our primary goal was to welcome 2016 under the sails, which we, to our delight, achieved.

We shared our joy with other teams during the lunch and winner announcement ceremony and hit the road as soon as we shook hands with our opponents and friends. We drove through a blizzard on our way back home, happy to take the taste of the salty wind from the Adriatic Sea with us.

When all is put together, it seems that we spent much more time driving to the coast and back than we spent under the sails. I agree that such decision was closer to insanity rather than to reasonable thinking, but, as the ancient Romans say, “de gustibus non est disputandum”. Some prefer skiing, some like football and some like the TV remote controller, but we like sailing more than anything and we got back home as happy as one can be. We strongly believe that, if the year started with good sailing, the rest of it should be the same.

1 thought on “Sailing with My Friends”