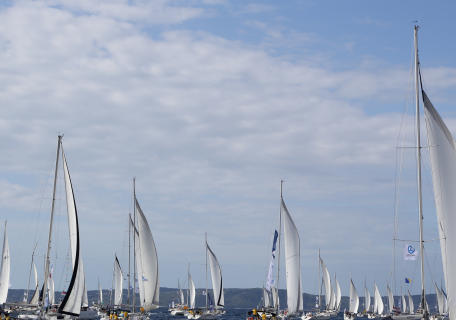 Nineteen years ago a sailing project called Mirno more or Friedensflotte – peaceful (calm) sea and peace fleet; was organized in the Croatian Adriatic. The project was originally designed in Vienna as an event that would help socially disadvantaged refugee children from former Yugoslavia during the war in the nineties by providing them sailing holidays. After the first event, held in 1994 and including children on three sailing yachts, the number of participants increased rapidly, as has the importance of the entire project. This year’s edition of Mirno more Friedensflotte gathered some 950 children from 17 countries on 101 sailing yachts. It is important to mention that Mirno more Friedensflotte welcomes not only socially disadvantaged children but also those who are in need of some kind of special care. A great number of sponsors has taken part in the project throughout the years. Sailing boats are provided for free from charter companies and private owners. Every boat is equipped by a professional educator and a skipper. The event is coordinated by experts who sail on flagship escorting the fleet. Medical care is provided by volunteer professional medical staff while communication is organized through an exclusive radio-frequency. Mirno more Friedensflotte aims to promote peace, tolerance, love and respect while their efforts were recognized by Austrian and Croatian authorities. Croatian President Ivo Josipović has pointed out that Mirno more Friedensflotte has given a great contribution to the development of solidarity and peaceful coexistence among neighboring countries and people. Aside from institutional and private sponsors and benefactors, such as Lions and Rotary International, ORF, Croatian Tourist Board etc., the project was also supported by UN Secretary-General Ban Ki-moon in 2010. Mirno more Friedensflotte usually takes place in the third week of September giving the children in need an opportunity to experience the beauties of Croatian Adriatic, to learn and improve their sailing skills, and above all, to learn that peace, tolerance and mutual respect are the supreme values that are to be cherished in order to build a better world. I wish you a calm sea, a fine wind and a strong mast!
charity Croatia flotilla