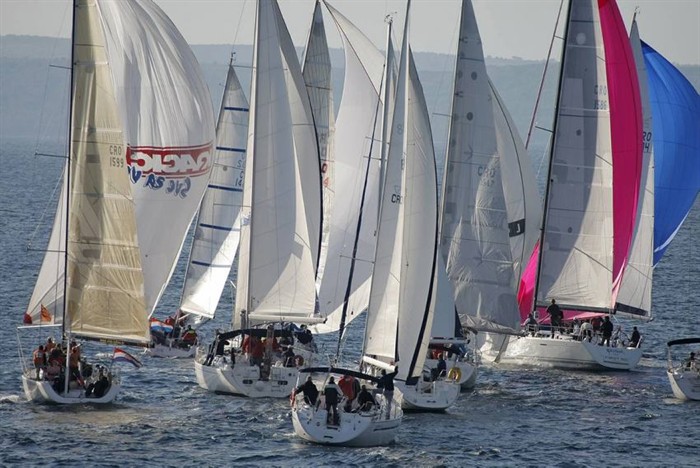 The end of summer sailing season is among Croatian sailors determined by Viška regata. This highly adored regatta is being held on the racecourse between Split and Vis town, the weekend after Barcolana in Trieste. This year it is going to be the weekend from October 17th to 19th. The first leg is being sailed from Split to Vis island. Next day is usually the day reserved for taking a rest from the first leg and to prepare for sailing back to Split. However, those who feel ready for a little more competition there is the cup of Vis port. It is a separate and amusing regatta held in the port of Vis. At the beginning of this cup the reward was a canister of red wine and Dalmatian ham pršut. Nowadays, the cup is being sailed for fun and prestige. However, the entire regatta is being held in very relaxed atmosphere because almost all competitors take part in this regatta for fun – to celebrate the end of summer season as well as the beginning of racing season. The night at Vis after the first leg already took its victims in terms of over partying and celebrating too much. Cheerful atmosphere continues during the Vis port cup when true athletes are being cheered and teased from the waterfront by those who keep their strength for the last leg. The final party and the winners’ celebration take place in Split, just before the departure of all those who still have to transfer their boats back to bases off Split. Make sure you don’t miss it because it is the 70th anniversary edition so organizers are expecting many crews while there will be some surprises within the off program for sure. Say goodbye to summer and hello to racing season at 70th edition of Viška regata and have lots of fun! To see the beautiful Vis area and charter a yacht, visit A Yacht Charter Split and find the ection about Vis. I wish you a calm sea, a fine wind and a strong mast!
Adriatic Sea Croatia Croatian islands Dalmatia race regatta Split Vis