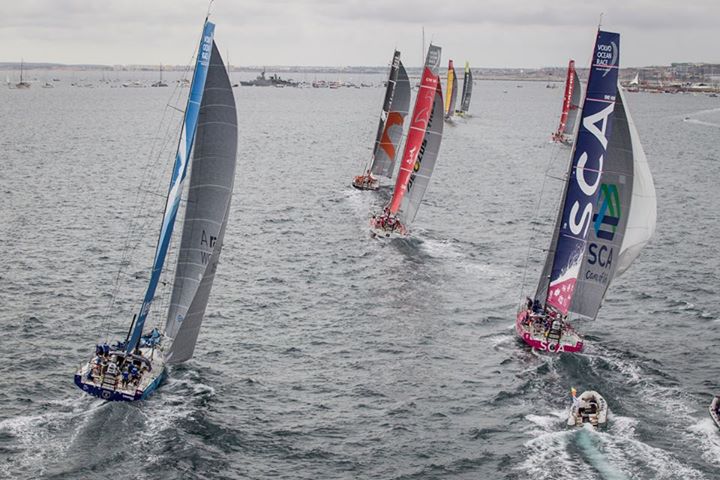 Sailing around the world was mentioned so many times as one’s lifetime achievement. I have heard so many times so far about the idea of completing recent job project, getting enough money to support the family and finance the boat, and finally to take off and sail around the world. I don’t have to mention that majority of such discussions ended up before they even started – at the first step. Completion of current job project usually gets long enough to block people achieving anything else in their lives and they usually get stuck in their chase for money. But that would be subject for some other discussion. I actually wanted to share with you some different point of view to round the world sailing. It is the Volvo Ocean Race. Something that is a lifetime achievement to some people became just one of the races in their sailing schedule. Volvo Ocean Race, formerly known as Whitbread Round the World Race is a yacht race around the world, held every three years. The race’s first start took place on September 8th 1973 in Portsmouth, United Kingdom. The route was meant to follow the square riggers’ route. They are historical sailing ships that carried cargo around the world in the 19th century. The race started more as an adventure event and remained so until wealthy sponsors, the media and modern technologies turned it into a sporting event. The history of Volvo Ocean Race abounds with dramatic stories about thrilling competition between teams, struggle with heavy weather, heroic salvages and supreme seamanship. The latest edition of the regatta started in Alicante, Spain on October 6th with the in-port race. Yes, in-port races have become the integral part of ocean sailing races in order to make them more attractive for thousands of spectators gathered in the starting port of every leg. Volvo Ocean Race 2014/2015 is specific and unlike any other edition so far for many reasons. Firstly, this year’s edition is being held on the monotype sailing boats, VOR 65. The decision about sailing on the same boats gives the same chances of winning the race to all teams. Furthermore, the chance of winning does not depend of the depth of the sponsor’s pocket in terms of technical characteristics of the boat, regarding the speed. Secondly, within this year’s edition two prizes will be given to the winners. First one goes to the team which is going to be the fastest in the circumnavigation. The other cup is going to be won by the team which gains the most points within the in-port races before every leg of the race. Thirdly, this year’s edition brings a beautiful novelty regarding the teams. This is the first time that an all-female crew will race against Volvo Ocean Race veterans and first-time rookies. It is the Team SCA with Samantha Davies at the helm. All the best girls!!! One of the loveliest novelties of Volvo Ocean Race 2014/2015 would be the rule regarding one crew member that does not actively participate in sailing. That position is reserved for a person who is taking care of constant reporting from the boat through all sorts of modern communication channels, especially internet. Since I did not have the opportunity to get aboard this year, it is quite understandable why I call this novelty one of the loveliest. You can follow the regatta through smartphone application as well. More daring sailors have the opportunity to compete in the regatta – virtually of course. It is a Volvo Ocean Race game which gathers 89.797 virtual skippers at the moment. See details and rules on Volvo Ocean Race 2014/2015 official website. At the end, it would be fair to introduce the teams and the route of the race. It started in Alicante, Spain with the first leg 6.487 nm long all the way to Cape Town, RSA. The second leg is meant to be sailed from Cape Town to Abu Dhabi, UAE, on the route 6.125 nm long. Leg 3 of the race considers sailing 4.670 nm from Abu Dhabi to Sanya, China. Fourth leg will be sailed 5.264 nm between Sanya and Auckland, NZ. South hemisphere leg five lies between Auckland and Itajaí, Brazil, on the route 6.776 nm long and refers to the longest leg of the race. American sixth leg will be held between Itajaí and Newport, USA on the 5.010 nm long route. The Atlantic seventh leg of the race will have Lisbon in Portugal as its destination after 2.800 nm of ocean sailing. The remaining legs will be sailed in Europe with Lorient, France; Hague, Netherlands; and Gothenburg, Sweden; as its final destination. There are seven teams competing in Volvo Ocean Race 2014/2015, combining experience of circumnavigation and single handed ocean sailing with the experience gathered at the Olympic racecourses. Let’s start with the ladies – Team SCA, led by Sam Davies, skipper who has never sailed this format of the regatta but has sound knowledge of ocean sailing regarding her experience of sailing Vendeé Globe. Ian Walker leads the team Abu Dhabi Racing. Bouwe Bekking is at the helm of Brunel, while Iker Martinez leads the crew of Mapfre along with Xabi Fernández, claiming for the first Spain’s victory. Charles Caudrelier leads ambitious Chinese Dongfeng Race Team, which consists of half Chinese and half international crew. Young American Charlie Enright leads Turkish sponsored Team Alvimedica. Experienced Australian Chris Nicholson, the four-time race veteran will lead Team Vestas Wind, a campaign sponsored by Vestas, the world’s leading wind energy company. According to the names stated on the crew lists thrilling and exciting sailing is guaranteed. Join the race virtually and follow your favorites through daily reports. The fleet has just crossed the Equator, which meant cheerful initiation ceremonies for the first-time crossers… I wish you a calm sea, a fine wind and a strong mast!
race regatta Volvo Ocean Race