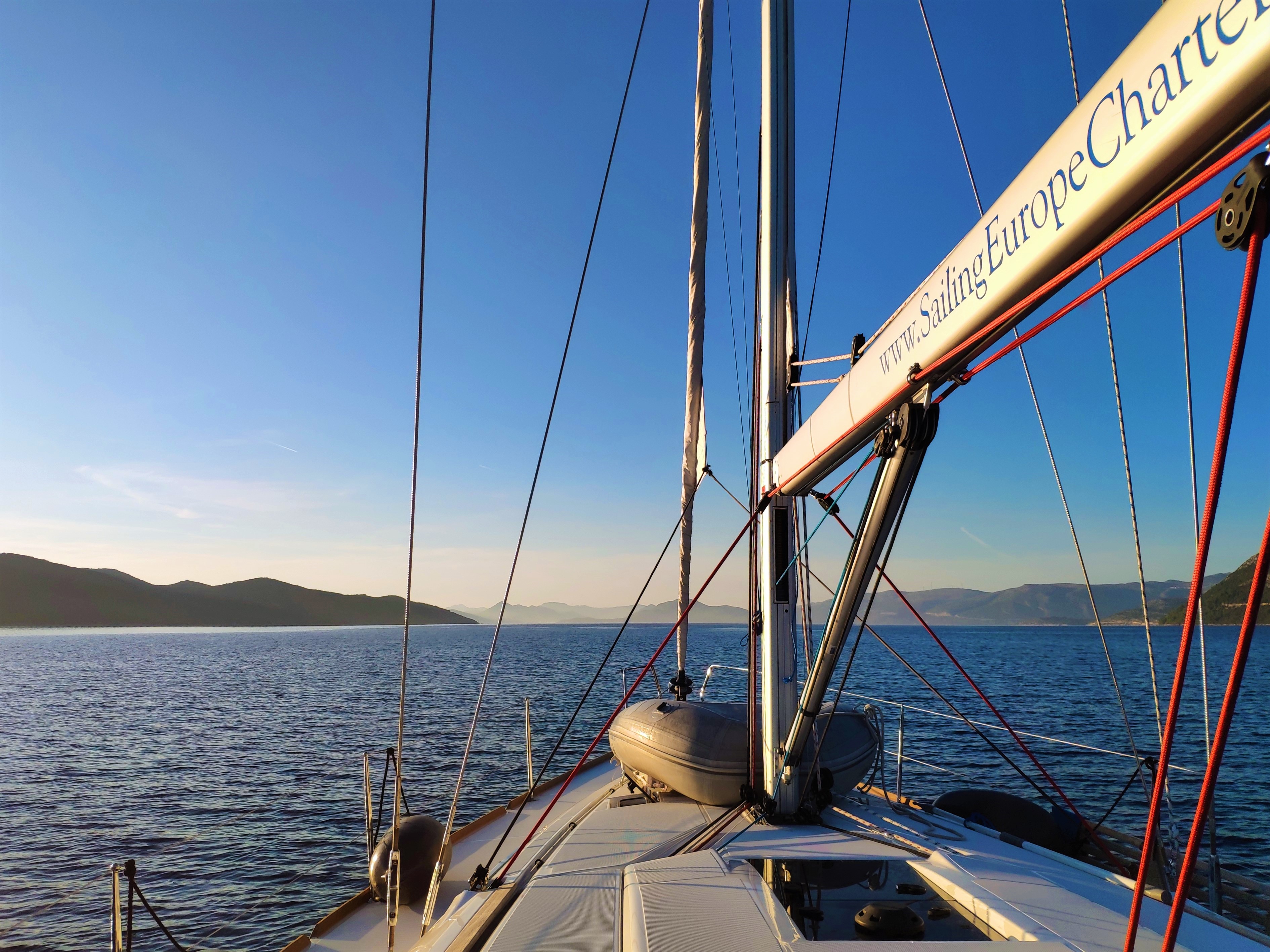 As a sailing season succumbs to brisk autumn months, a group of diligent people is warming up for their painstakingly earned vacation - one-way charter from Dubrovnik to Rogač. What better way to celebrate a successful year of work than doing exactly what we offer?

Talking about teambuilding in our offices never ceases, but fluctuates in its thematic during all 365 days of a year. Winter months are reserved for reminiscing about the previous one, and while the sailing season intensifies, all and sundry are occasionally putting their thinking caps to bring the next teambuilding into existence.

The decision about a one-way charter from Dubrovnik to our boat base in Rogač on Šolta Island was met with cheers. Dubrovnik has always been a hot topic during (modern) history, but many a Croatian did not visit this architectural wonder due to its geographical distance from the rest of the country.

Our main office is in the capital of Croatia – Zagreb – which has a direct 45-minute flight to Dubrovnik operated by Croatia Airlines. We landed in Dubrovnik in the sunny October morning to make the most of the day, that is, to be able to sail away in the afternoon. One out of the common situation for us was that we took almost every possible type of transport that day, from cars, vans and public transport buses to planes to boats.

When a sailing crew arrives to King’s Landing by plane, they have a possibility to be transferred directly to ACI Marina Dubrovnik where we keep our boats when doing one-way charters. The ride takes around 30 minutes with a van.

Once in the marina situated in the long funnel-like gulf, we had some free time to spare while waiting for the boats to be cleaned from the previous one-way charter (from Rogač to Dubrovnik). That was the last one in our charter’s sailing season based on which we planned our teambuilding. Since it was already a second half of October, the marina was getting into a hibernation mode, at odds with what sailors experience during high season months (June-September), so we circumambulated the marina looking for a bite and a sip of coffee.

The time has come for our Lagoon 42 and two Sun Odyssey 449 to sail towards Šipan Island while passing by the rest of the Elaphiti Islands (Koločep and Lopud). Although it takes some time for a boat to sail out of the gulf, floating on waves while being surrounded by orange-roofed buildings bedecking the base of a mountain range feels dreamlike. The awakening happened at the moment we had sailed under a 49-meter-tall bridge that left us with the open sea in front of us.

The Adriatic Sea welcomed us with gentle waves and almost no wind, so we cruised the sea using motors. Some of us sunbathed, some were focused on getting a perfect shot of the mainland, some discussed the technique of sailing, but everybody agreed upon a celebratory teambuilding drink.

Several hours of sailing behind us and we are now throwing mooring ropes in Šipanska Luka while the sun is squeezing out its last rays upon the bay. Tourists are nowhere to be found. We were greeted and accompanied by the remaining part of our team that was sailing from Rogač towards Šipanska Luka on Lagoon 450 F.

Friendly locals tired out from what seems to be an everlasting summer are telling us about their close-knitted island community preparing for this year’s olive-picking. A rare passer-by is lured by a whiff of different aromas mixing in the air between moored boats as our self-made chefs prepare dinners on each one. Those of us who wanted to escape cradling of the boat walked along the stone-paved promenade that quickly turned into an earthy road sided by olive fields which felt soporific at the end of the day, but invigorating after you wake up.

A sailing leg of considerable length is ahead of us. We embarked immediately after everybody has finished with their morning routine. Our next destination was Lumbarda on Korčula Island. Sailing northwest towards Lumbarda meant we were passing green Mljet Island on our left and rocky Pelješac Peninsula on our right. The sailing part is to last well-nigh the whole day, so one sailboat slowed down to fish, and one catamaran made a brave swim stop. Once you are over an initial cold shock, the sea is (for some) quite pleasant to swim in.

Lumbarda is another currently-peaceful destination where we moored our boats, and hurried up for another swim, this time entering the sea from the pebbled beach. There are showers and toilets that sailors can use on land, which is perfect for those who prefer more space and privacy.

Meanwhile, two of our colleagues adventurously hitchhiked from Lumbarda to Korčula Town. A local gramps picked them up with an old car and told them a little bit about the island. When seen from above, Korčula Town resembles a fishbone, bones being narrow, cobbled streets packed with people during summer months, but relatively empty at the moment.

The dark protruded on all sides, so we cuddled up on decks in our branded deep-blue hoodies with a glass of Croatian wine. One glass turned into another, and we were soon singing in at least five languages – and laughing in the same one.

The next day we had another lengthy fishing-and-swimming leg on our one-way charter towards Hvar Island. We passed Šćedro Island, and were left dumbstruck by the beauty of Hvar Town once we approached it. It looks like a pocket-sized Dubrovnik, except it has fortress walls on the hill and not on the coastline.

Mooring on the promenade is virtually impossible during summer. We always advise our clients to think about mooring in ACI Marina Palmižana on the Paklinski Islands across Hvar Town. However, even in late October you can see tourists casually walking around town, but you cannot hear anyone speaking Croatian except a SailingEurope crew.

Tonight we are having dinner in a restaurant in one of the narrow, cobbled streets of Hvar Town. We appetized with a classic combination of cheese, prosciutto and white wine, having veal under the bell as a main course, and sweetening it all up with semifreddo.

Although Hvar Town is considered to be a top partying destination on the Croatian coast, we opted for a private party time on boats again that was amplified by jugo, a wind that rocked our boats until the morning which made some crew members have a trouble falling asleep.

The next morning was suddenly so hot outside that it genuinely felt like summer. Spoons clanking in coffee cups added another harmonic sound to sunny clamoring streets and waves splashing against boats. The view from Fortica (a fortress) is breathtaking and well worth the hike, chaperoned by numerous plants of various smells and colors, but also by an abundance of rocks balanced on top of each other that tourists pile up on their way up.

Now, after a five-day one-way charter, was a time to return the boats to our base in Rogač on Šolta Island. We passed the Paklinski Islands and Brač Island, and safely moored both catamarans and both sailboats in their designated mooring places. All 20 boats were now together and ready for wintering.

While some of us were exploring Šolta Island, the rest were preparing fish they caught during the week. Since the base serves as a mooring place for the SailingEurope Charter fleet only, it is ever so practical to have a barbecue dinner right in front of the boats.

As the teambuilding was coming to an end, the crew was hanging out deep into the night.

The hardest wake-up during our one-way charter was on the last day when we had to say goodbye to colleagues in the base we rarely see. We are hopping on the ferry that takes around an hour to Split, and going back to our offices in Zagreb to inaugurate a new sailing season.