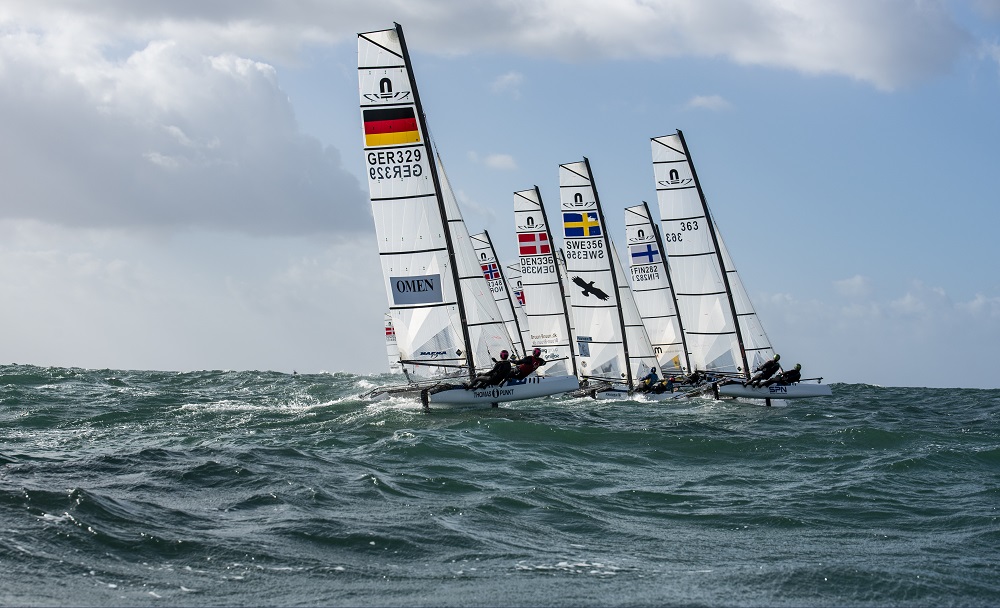 Now that you’ve learned the basics of sailing, started using sailing quotes in your everyday speech and learned how to tie sailor knots, it is time you take things on the next level and start participating in sailboat racing (sailboats races) or regattas.

Sailboat racing has its origins in Holland and from there, it was introduced into England and American colonies of the 17th century. Back then, the members of yacht clubs would join together and organize all sorts of competitions for social and recreational purposes. One of them were sailboats races. One of the oldest international sailboat racing events is America’s Cup.

What Is A Regatta?

Nowadays, a sail boat race is the same as a regatta. They can be professional or amateur, charitable or just for fun. Regatta consist of individual races, where the overall winner is the crew that performs best in the majority of the races. There are different types of regattas and there is a great variety of sailboats for racing.

One of the most common divisions is to:

This type of race is the most common in the world of sailing. There are two main formats of fleet racing. The first one is a “one-design” format that requires that all sailboats belong to the same class. The second one is a Performance Handicap Racing Fleet (PHRF) that allows sailboats to be from different classes. In the second format the aim is to play fair, which means that faster boat classes need to give advantage to the slower ones and start racing later. Fleet racing doesn’t have a set duration.

In a match race there are two identical sailboats that are competing against each other. The rules are simple - the first boat to cross the finish line is the winner. However, since the boats are identical, there are lots of tactics that needs to be employed by the sailors in order to win. This is one of the shortest sailboat races, lasting only 20 minutes.

When team racing, there are, as the name indicates, two teams racing against each other. There are usually two to four boats per team. The winner of a team race isn’t solely the team that is the first one to cross the finish line, but the points are added to each sailboat. The important thing is that the team that has less points is the one to win, so the first one to cross the finish line earns one point, the second one two points exc. This sailboat race lasts only around 10 minutes.

Other Types of Regattas

A discipline where the main goal is to sail a vessel as fast as possible. The overall speed is then being recorded (it is measured in knots). Windsurfing and kiteboarding are the most popular in this category.

Regatta around the buoys

Usually held in a regatta field. The rules are simple - there is a determined number of buoys that boats have to sail around.

Or so-called ocean racing is usually around larger areas, such as islands, even continents. This is quite a dangerous sport since it alludes to long-distance solo sailing.

Other than that, there is a great variety of boats for sailing races, for example dinghies, large yachts, catamarans, race boats exc.

What Are The Basic Racing Rules?

Sportsmanship and the Rules

Sailing, just as any other sport, has prescribed rules that need to be followed and enforced. Competitors must respect a fundamental principle of sportsmanship, which means that if they break a rule, they will be a penalty (which in some cases means retirement).

Competitors in sailboat races are also responsible for the environment, in this case for the water. They need to minimize any negative impact that the sport could have on the environment.

The rules in racing are important, but following them isn’t the only way that leads to winning. It is also important to learn the tactics. You have to be aware that the weather might not be perfect, there could be waves, wind and other unpleasant weather conditions. Good tacticians will know how to maneuver the boat in every situation and will know how to make the best out of the worst. This, of course, requires a lot of practice and experience. But don’t be discouraged because nothing is impossible to those who are determined to succeed.

How To Prepare And What To Pack For Sailboat Racing?

When planning a sailboat race, you need to take into account that you will be working hard and therefore you need to prepare physically. The last thing you want during a regatta is a sore body so go ahead and run, visit the gym, lift weights and prepare your muscles before you head to the sea. Other than preparing your body, you need to have the right mindset. The most important thing is to stay focused on your goal.

After you’ve prepared yourself physically and mentally, you need to pack.

You can find more about the most prestigious regattas in the world in our two part article:

Sailboat racing is also an Olympic discipline and has been part of the Olympic Games since 1900. Olympic sailors compete in nine classes.

Gladuša - the most popular spring regatta, it usually starts mid-April on Dugi Otok

Fiumanka - the biggest regatta in the northern Adriatic, every June in Rijeka

Južnodalmatinska regata - the most popular summer regatta, every August, lasts four days, the sailing route includes the city of Dubrovnik, as well as islands of Mljet and Orebić

Mala noćna regata - a cool, relaxing night regatta in mid-August on the island of Brač

Viška regata - ideal regatta for the end of the season, in October, the sailing route includes the city Split and the island of Vis

Croatia Is A Common Host To World’s Famous Sailboat racing Championships, Such As:

Barcolana - a massive international regatta with over 2000 sailboats, always in October in Trst

In the end, after you’ve studied the rules, decided on the type of race and prepared yourself, all that’s left is the race itself. Ready, set, go!